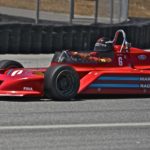 Motorsports Market began racing the March 79B – F1 driver Derek Daly’s pro Formula Atlantic car for 1979 – in 2011. The car was run by Fred Opert Racing, who also ran factory supported team cars for Keke Rosberg and other F1 drivers. The March is one of the last flat bottom Formula Atlantic cars built, and is highly competitive in the historic Formula Atlantic series. The 1,100 lb. monocoque chassis is powered by a 1600 c.c., 240 h.p. Cosworth BDD with a Hewland FT-200, five speed, gearbox.