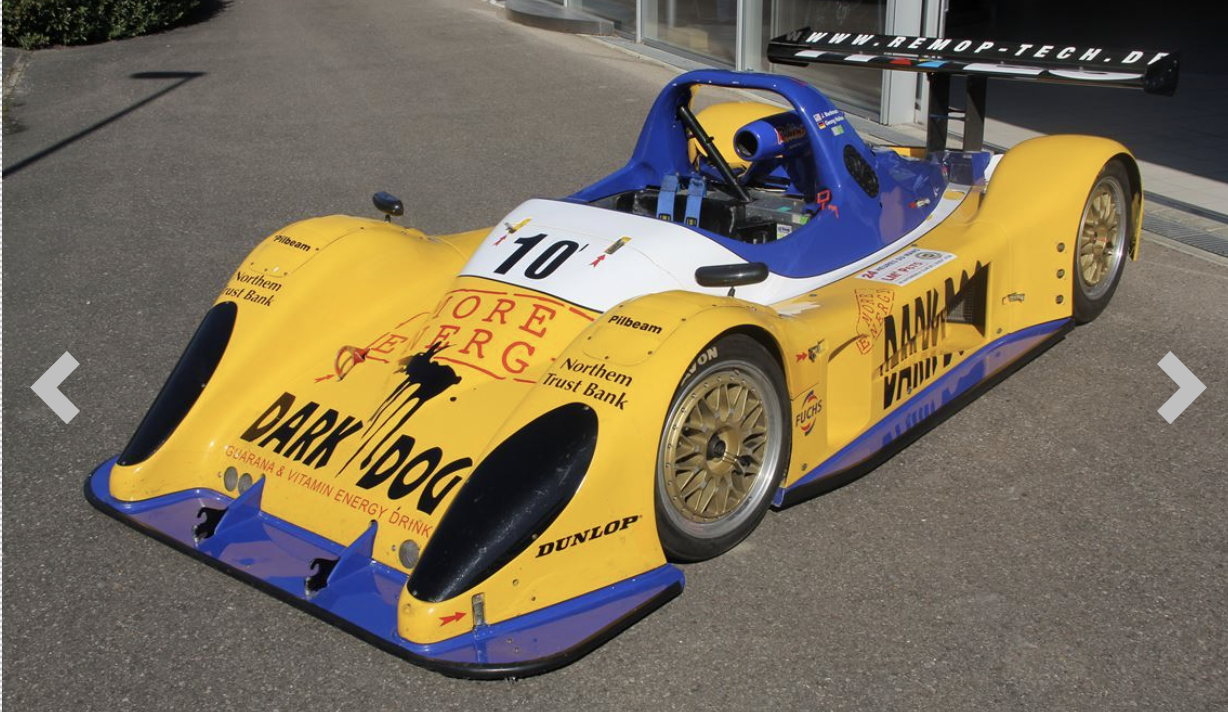 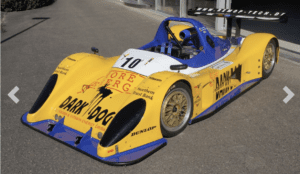 This Pilbeam began as the Pilbeam Racing America team car, chassis number MP84-05 (Racing Sports Cars) MP84-05 was entered by Pilbeam Racing for the 2001 Rolex 24 at Daytona. However, the car was withdrawn before the start.

The Pilbeam’s first actual race was the Petite Le Mans race at Road Atlanta in October of 2001. There the Pilbeam was entered as an LMP 675 by Team Bucknum Racing. The drivers were Chris McMurry, Bret Arsenault, and Bryan Willman. The Pilbeam did not make it to the finish.

Team Bucknum Racing (founded by Jeff Bucknum, son of F1 and IndyCar driver Ronnie Bucknum) were back with the Pilbeam in 2002. They got off to a rough start failing to qualify for the Rolex 24, and then suffering an engine failure during the Sebring 12 Hours. Things got a little better at the ALMS race at Laguna Seca where they finished 18th, but they could only manage 29th at the season ending Petit Le Mans race back at Road Atlanta.

Between the 2002 season and the start of the 2003 season, chasssis MP84-05 was upgraded to the new Pilbeam MP91 specs, and renumbered MP91-01 Racing Sports Cars The Nissan V6 engine was also removed and replaced with a Willman JPX  3.4 liter V6  producing over 500 h.p.

According to Racing Sports Cars Team Bucknum entered MP91-01 for the 2003 Sebring 12 Hours. They had also picked up sponsorship from energy drink maker Dark Dog.  Unfortunately the Pilbeam was sidelined during the race with electrical problems.

Despite the setbacks, the Bucknum team was determined to head to Circuit de La Sarthe for the Le Mans test in May, and then the 71st Le Mans 24 Hour in June. The Pilbeam qualified 31st, but failed to finish with engine woes.

The next two races of the 2003 season would see good qualifying results at Road America (8th), Laguna Seca (7th) but reliability issues hampered results. An engine failure at Road Atlanta ended the season.

2004 saw the Pilbeam sporting a new blue and white checkered livery and a new Nissan AER 3.0 liter V6 engine. The car would now be racing in the LMP2 category.

The Pilbeam was often quick in qualifying (4th, 6th, 8th, etc.), but suffered more reliability issues during the races. Thereafter the car was retired.

Fast forwarding to 2021, the Pilbeam has now achieved the reliability, and the success it could have achieved back in the early 2000’s if it had had the additional support and development that it needed. To prove the point, in 2021 the Pilbeam won the Group C Classics Championship.

There are 6.5 hours on the 3.4 liter 120 degree AER or JPX engine that produces approximately 500 h.p.  The power is transmitted through a Hewland NLT gearbox. The car has a new fuel tank, belts, and fire extinguisher. The car comes with various spares including three sets of wheels.

The Pilbeam is currently located in Germany. The price for the car is the same regardless of where you are located or where you may find it advertised. We are working transparently with the owner to help him get the car sold and to assist with logistics. We can also help you with shipping worldwide. Just let us know your nearest port and we can get you a quote.

If you are located outside of Germany, but would like to leave the car in Europe to race it there either for a single event, such as Le Mans Classic or several events, we can assist with getting support for you. Just let us know.

This Pilbeam is a great value and could well be the least expensive prototype entry for Le Mans Classic and other major historic LMP events. It has also proven its current competitiveness and reliability by winning the 2021 Group C Classics Championship. Please contact us for pricing and further details.