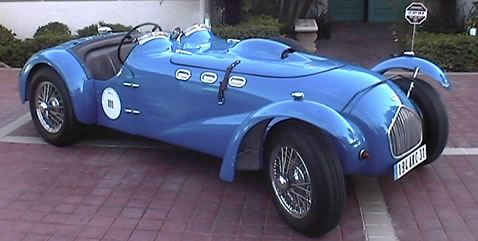 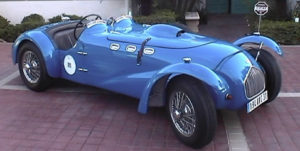 This 1950 Allard J2, chassis number 1573, was originally sold to Mr. Hewitt Tate. The car was finished in grey with red upholstery, and was right hand drive.

Subsequent to Mr. Tate’s ownership, the Allard came to the United States. It was there, in Florida, that Jean Fracois du Montant purchased the car. By the time of du Montant’s purchase, the car had been fully restored, now finished in French racing blue with black upholstery. The car is still in this restored configuration.

The Allard J2 is one of the great early 1950’s sports racing cars. They won countless races against Ferrari, Maserati, Jaguar, Porsche, etc. The J2 even finished third overall at Le Mans in 1950. The J2’s were the most successful of all the Allards, and were dominant cars at many sports car races during the early days of post-war sports car racing.

Today these cars are revered and coveted by generations of sports car enthusiasts. The J2’s classic design and styling, combined with its raucus, raw, V8 horsepower, is a commanding presence, and great crowd pleaser, at any historic race car meeting. Allard has been a featured marque at the Monterey Historic Automobile Races, and will also be the subject of a featured reunion later this year at Texas Motor Speedway, “The Gathering of the Clan” in late October.

The values of these cars have been climbing again for a considerable time now, even despite some uncertainty in the general economy. Some J2’s are currently offered at over $230,000. This beautiful J2 can be purchased now for only $129,500. This figure is also considerably less than another Allard we just recently sold. This Allard represents an excellent value, and great opportunity in the current market, and presents a considerable upside potential in the long term.

If you want to own and drive one of the classic, burley, sports cars of the early 1950’s, at an excellent value, this car warrants serious consideration.