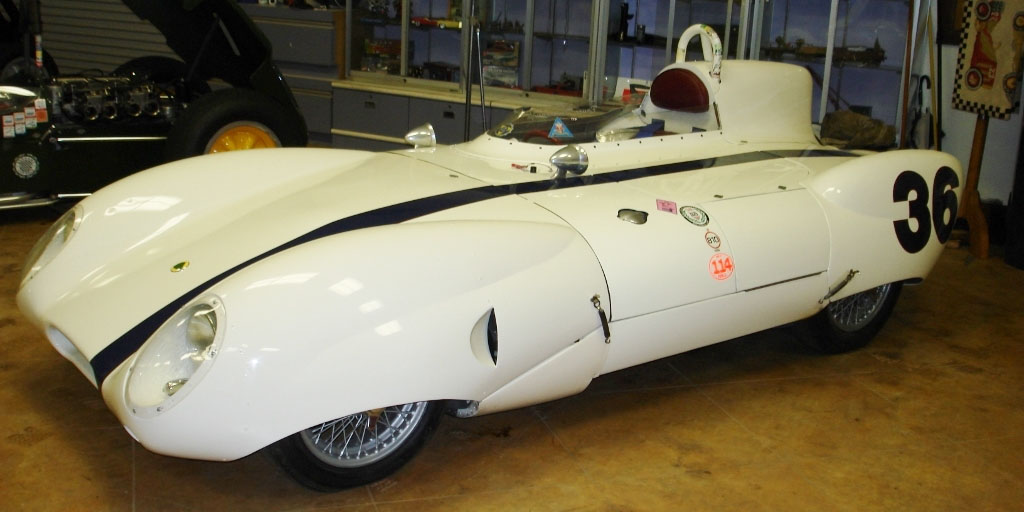 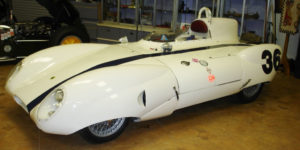 Lotus Eleven, chassis #150, was one of the very first Lotus XI’s ever built. It was, in fact, the first Lotus XI to receive a chassis tag, chassis number, #150. The car still retains its original chassis tag to this day. The Lotus was powered by an 1100 cc Coventry Climax engine.

Lotus XI, #150, was purchased new from the factory by Ralph Miller of Lincoln, Nebraska. On the appointed day in February, 1956, chassis #150 was driven from the Lotus factory to the docks at Southampton. The car was piloted by a young up and coming Lotus mechanic/driver named Graham Hill. Hill, himself, would soon gain renown for his driving talents behind the wheel of another Lotus XI , chassis #208, “The Yellow Peril.”

Chassis #150 was loaded at Southampton and shipped to New York. The Lotus arrived in March. Miller promptly picked up the car and headed south to Sebring, Florida. Miller had a provisional entry for the car in the Sebring 12 Hour sports car race, scheduled for March 24th. Dr. Harold Fenner would be Miller’s co-driver.

Despite being one of the first Lotus XI’s ever constructed, Miller’s Lotus XI was not the only Lotus XI entered in the 1956 Sebring 12 Hour. It was one of two. A second car, #156, was entered by Lotus Engineering for Lotus founder Colin Chapman to race. This car was purchased by Briggs Cunningham and was to be first raced by Chapman at Sebring. Unfortunately the Chapman/Cunningham car was rolled by Chapman’s co-driver, Len Bastrop in the Friday practice. The car also caught fire – putting an end to their attempt to be the first to race the new Lotus XI. For further details on this story, and more about chassis #150 and #156 at Sebring, please see the article, “Debut Car” by noted Lotus XI experts, Jay Sloane and Victor Thomas at:
http://www.lotuseleven.org/DarkAges2/chassis_156.htm

Meanwhile while Chapman and Cunningham were having their struggles with #156, attrition by other entrants opened the door for Miller’s #150 to gain entry to the race. Thus when the green flag fell at 10:00 a.m. on the morning of March 24th, it was Miller’s #150 that became the first Lotus XI to ever race.

Miller raced the Lotus with the number “63” on the front and both sides. See the black and white photo shown here that depicts the car as it was on that day in Sebring. The Lotus completed some 40 circuits until it succumbed to electrical problems. It’s 12 Hours was done early. However, chassis #150 had been the first XI to see competition, and at a major international sports car race to boot.

After Sebring, Miller raced the car through most of 1956. He entered it at events at Eagle Mountain, Texas, and Road America in Wisconsin, among other places. Miller captured #150’s first victory at Eagle Mountain on June 3, 1956. As 1956 was drawing to a close, facing financial and marital problems, Miller sold the car to Loyal Katskee of Wichita, Kansas.

Katskee raced the Lotus a couple times in the Fall of 1956 before selling it to Bobby Aylward, also of Wichita. Both won with #150. Aylward went on to race the Lotus extensively for the next couple years at events including those held in Galveston, Texas; Mansfield, Louisiana; and Stillwater, Oklahoma .

In May 1958, the car was wrecked while traveling to Eureka Springs, Arkansas when Aylward’s trailer broke loose from his tow vehicle and rolled over. Soon after the wreck, Bobby traded the car to Jim Hall (Carroll Shelby Motors of Dallas) for a 2.5 liter Maserati 250S.

Bill Parham of Ft. Worth, Texas, bought the wrecked Lotus from Shelby Motors. After repairing it, he raced it in the Ft. Worth area for a year or so.

The racing history and the ownership history is unknown for the next 10 years. One of Parham’s crew, a gentleman named David Jones, recalls seeing the car behind a body shop in Ft. Worth around 1963. He remembers that the head fairing was missing. Who owned it, and what it was doing at the body shop is unknown.

The car reappeared in 1970 in Lawton Oklahoma at Ft. Sill (an Army base) when a young serviceman named Stephen Klein purchased the car. He recalls that it came with a silver trailer, and was powered by a 3 cylinder Saab engine. A full windshield had been installed, and the head fairing was still missing. It was running and drivable. Klein took it home to St. Joseph, MO. when he left the service.

In 1973 Bill Ballentine of St. Joseph, Missouri purchased the car from Klein. It was in terrible disrepair. Fortunately, the little handmade Lotus factory 150 serial number plaque was still attached to the car. Bill kept the car for about five years. He used the car for parts to repair another Lotus Eleven he owned. Eventually he sold the remains of #150 to Bill Hutton (engine builder) of Knoxville, Tennessee around 1978. Hutton sold off more of the remaining parts that were with the car and hung the frame on the ceiling of his shop. The frame stayed on the ceiling until around 1986. At that point, a visitor to the Hutton shop saw the frame and realized it was the frame for a Lotus Eleven.

In the late eighties the frame was purchased and the chassis was sent to the UK for restoration. Mike Brotherwood was commissioned to do the restoration. Brotherwood documented the usefulness, and in some cases the uniqueness, of the early Eleven frame in a letter to Berre, a later owner. A new body was purchased from Williams and Pritchard. Brotherwood provided the remaining bits.

By 1991, Michael Lavers of the UK had purchased the car. He vintage raced it extensively in the UK and Europe. Some of the scrutineering tickets from that period are still on the car.

In the late nineties, Lavers sold the car to Dr. Ed Berre of Cincinnati, Ohio. Ed brought the car to the US and re-restored it. Ed raced the car from the late 90’s through 2003 at a variety of vintage events at Road America, Mid-Ohio, Summit Point, etc. #150 was selected as “Pick of the Liter” by Vintage Motorsport magazine at the Mid Ohio Sprint Vintage GP in 1998.

The present owner bought #150 in early 2005. The Lotus has raced a handful of times since, including the 50th anniversary of the Lotus Eleven debut at Sebring in 2006. Lotus #150 continued to claim more race victories during this time. The Lotus was last raced in May 2014, where it finished second.

Stage 4, 1460 c.c. Coventry Climax FWB engine built by Bill Hutton, Hutton Engineering in Tennessee in 1998. Engine was rebuilt in 2003 by a Dave Tabor, Comptune, Medina Ohio. The engine has approximately 25 hours on it since.

BMC transmission made into a dog box by Richmond Gear. Quaiffe limited slip differential, believed to be 3.9 to one. Spare 4.55 differential included as well as an additional spare with an unknown ratio. The gearbox has approximately 20 hours on it. Both engine and gearbox operate fine. However if one wants to run right at the front, a freshening would probably be in order simply because of the time on them, not because of any problems or perceived loss of power.

Additional spares include a second set of mounted wire wheels.