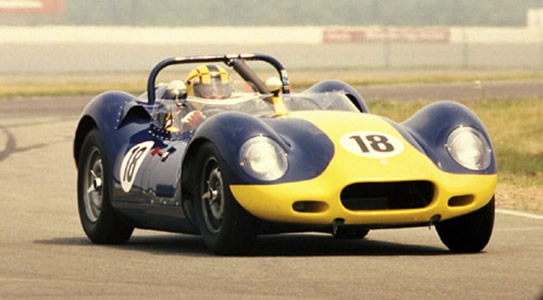 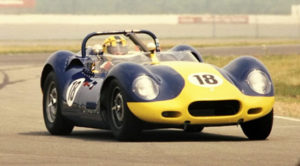 This 1958 Lister Jaguar is one of only 18-20 “Knobbly” bodied Listers. BHL-112 is one of the most original surviving Knobbly Listers in existence. It has never suffered damage from a shunt.

BHL-112 was originally sold to Cunningham Racing (Briggs Cunningham and Alfred Momo). The car was then sold to Nickey Chevrolet in Chicago.

BHL-112 remained with Nickey until they acquired a Scarab from Lance Reventlow Automobiles and sold the Lister to Richard Vogel of Milwaukee, Wisconsin. The Lister raced successfully during the 1959-60 seasons with Vogel’s driver, Fred Rediske, at the wheel. In 1961, the car was sold to Chicago racer Howard Quick, who competed with it through 1963. BHL-112 was subsequently acquired by Richard Dagiel, another Chicago area racer.

In 1968, the Lister was purchased by Tom McArthur of Milwaukee. McArthur had the body restored by Raymond Besasie (builder of the original Excalibur racing cars for Brooks Stevens). McArthur raced the now Chevy powered Lister in Midwest events through 1982.

Between 1982 and 1984, the car was rebuilt again from the ground up by Jim Kaufman (a well known Ferrari/Jaguar specialist) at his restoration facility in Green Bay, Wisconsin. The rebuild included the fitting of new nose and tail sections. These were hand made, utilizing the original bucks and patterns, by R.S. Panels of Nuneaton, England.

At the same time the Chevrolet engine was removed and a Jaguar engine (built by Kaufman to 3.8 litre D Type specifications) was reinstalled. Following restoration, the car was once again raced by McArther until he retired in October, 1986. In the later 1980’s, Peter Giddings, the well known pre-war vintage racing car driver, discovered the now immaculate Lister at a car show in Elkhart Lake, Wisconsin. He subsequently acquired the car.

During Mr. Gidding’s ownership, the original Salisbury hypoid crown wheel and pinion assembly was rebuilt. The king pins were replaced with Phil Reilly designed pins, which were considerably stronger and safer than the originals. The front A-arms were also rebuilt and reinforced. Mr. Giddings additionally extended the pedal box to accommodate his long legs.

In 1994, Mr. Giddings sold the car to avid Lister afficionado/collector, Syd Silverman. While in Mr. Sliverman’s hands, the Lister has been the subject of several years of testing and development with such notable drivers as Tony Dron and Bob Hebert. The car has scored many overall wins and class victories in vintage races throughout the United States. BHL-112 has also been the subject of several magazine articles in both the U.K. and the U.S. Brian Lister, himself, has accompanied BHL-112 to some of the vintage events, enjoying again the sights and sounds of his wonderful creations.

The chassis, brakes, wheels, transmission, clutch, final drive, tanks, gauges (except the electronic tach fitted with a D Type face) are all original. Although the nose and tail sections have been replaced, as mentioned above, with panels formed by R.S. Panels in England, the magnesium electron doors and center body section are as they left the Lister works in 1958. The original steering wheel (a smaller one is currently fitted) and original upholstery (not currently fitted) come with the car. The LeMans headlights, the taillights, and the rest of the lighting system are all original.

BHL-112 is powered by a 3.8 litre Jaguar engine, fitted with 3 X 450 DCOE Weber
carburetors, and mated to an E-Type gearbox. The engine has the original D Type exhaust headers, exhaust pipes, oil filter, fuel pumps, shut offs, and ignition. The dry sump lubrication is by a belt driven Peterson unit.