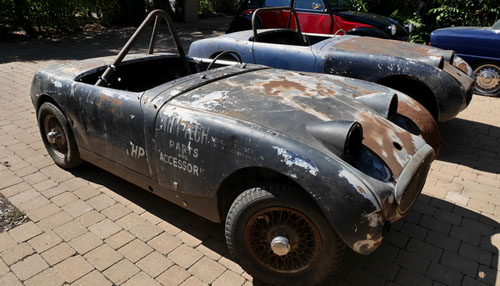 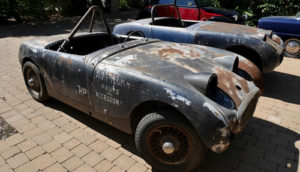 We offer everything from restored historic Formula One cars to entry level project racing cars with good histories. The description below is straight from the current owner.

“Both cars have obviously been sitting for years and need full restoration. The bodies on both cars are surprisingly solid. Neither has seats and the rest is mostly gutted for racing. #63 has the motor and transmission, and an old CA pink slip. The other car is a roller with no powertrain or title. Both have valid VIN plates, and could be street registered if desired-

Car #57 was raced extensively back in the ’60’s. It had many high finishes including a 1st in class at Riverside Raceway in a 6 hr Enduro on July 4, 1968. It has disc front brakes, dual master cylinders, and drum rear brakes. The engine that comes with this car was built using domed Huffaker pistons, forged rockers, Isky lifters, sodium cooled valves, and a nitrided crank. The bonnet is set up to be a tilt forward style, and the rear axles are hardened. Right rear fender bumped a hay bale on its last outing on the track. The gentleman that raced this car had a Mini Cooper Parts business called Mini Tech in Santa Barbara, and the graphics are still on the car. Now in his 80’s he is still around and living in Southern California.

Car #63 was raced by by a friend of his named Tom Downey. They evidently did many of the same events, but the full history on car #63 is not known at this time. The old B&W photo is of this car during an event (remnants of these graphics are still on the car).

See the history section above.