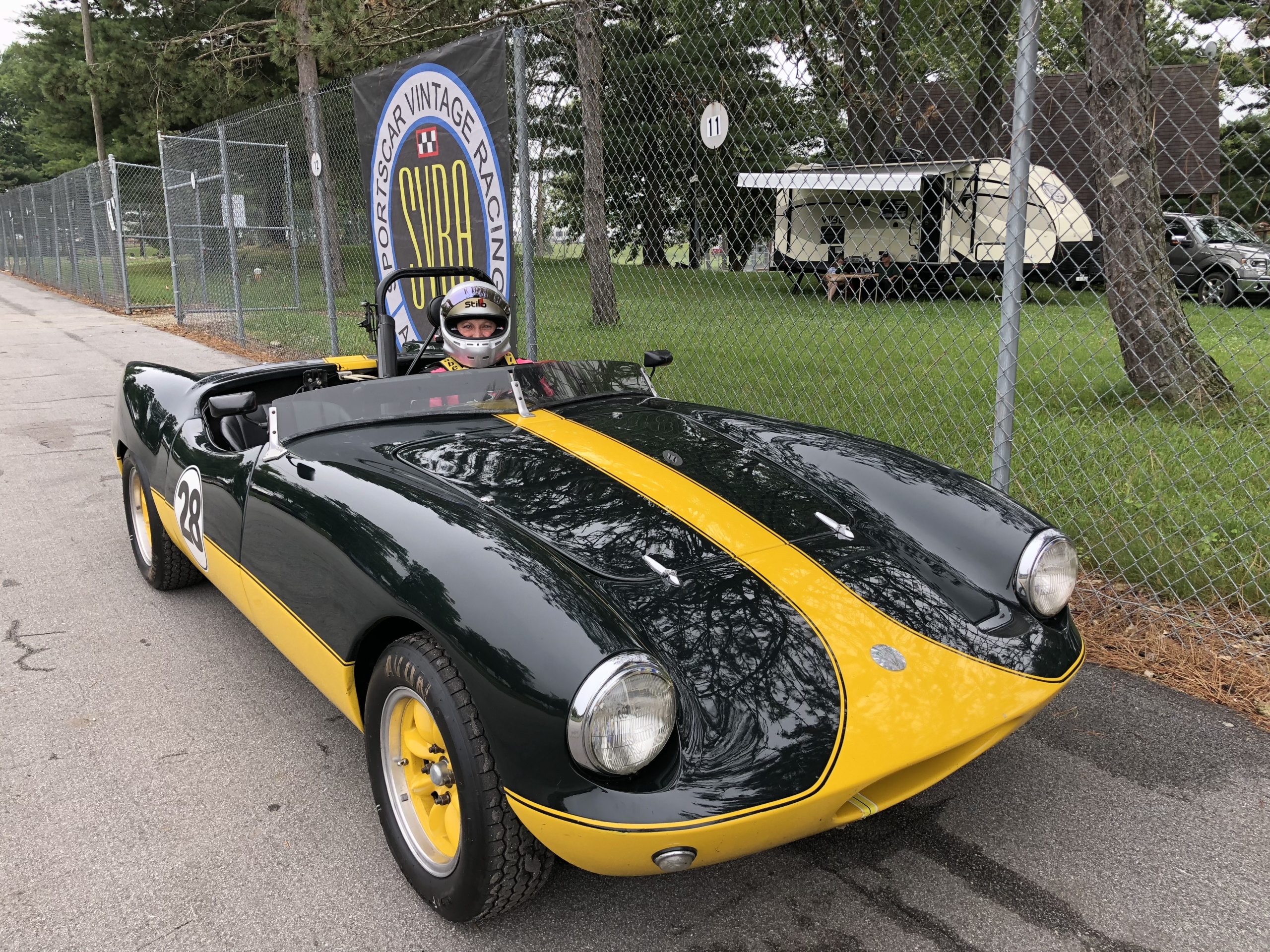 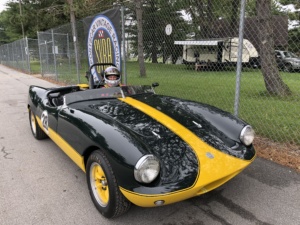 This is the Ex-Harvey Siegel (Virginia International Raceway owner/developer) Elva Courier, VIN 110-115. It has been raced throughout the U.S. including multiple Elva Reunions. The Elva has also been signed by Elva founder, Frank Nichols.

Documents discovered to date show the Elva’s history back to sometime prior to 1987. During this pre-1987 period the Elva was owned and raced in solo competitions by Lou Hodges in California. In 1987, the Elva was purchased by Steven Linn, of Madison, Wisconsin. Linn intended to race the car, and possibly trade it for another Elva race car.

During Linn’s ownership the Elva ran an 1800 cc engine with a ported and flowed head, heavy duty valve springs, and ran 10.5:1 compression. It had dished pistons, a cross-drilled crank, and custom exhaust header. It had a bolt in roll bar and full safety harness.

Thereafter the car was purchased by Harvey Siegel, who raced the car on along U.S. eastern seaboard, including at the aforementioned Elva Reunions. In 2018, Siegel sold the Elva to its current owner who has raced it up through the end of 2019. The Elva comes with a New Jersey state title.

The Courier is currently powered by an 1800 cc, wet sump MG race engine with a 45 DCOE Weber. It is mated to a Quaife transmission. Brakes are proper front disc and rear drum. The wheels are aluminum Panasports.

The Elva has been professionally maintained, and presents itself very nicely with the patina of a current racing car. There has never been significant damage or body repair to the car’s fiberglass bodywork.

Its most recent races include the following:

When the Elva was last purchased in 2018, the review of the spare parts package uncovered a litany of items. There was a complete fresh spare race engine. There were  three additional cast iron block cores. A new transmission was discovered along with  multiple rear axles both left and right. It appears there were more than three sets of wheels as well.

Also included were at least one complete diff and 2 or 3 pinions. There were 2 rear axle housings. Additionally, “original take–off” items were discovered. These were the car’s original street items that were saved when the car was built into a race car. They include the convertible top frame and bumpers, etc. Also included were a variety of disc brakes, brake pads, distributors, and all manners of things including clutches and a flywheel.

These Elvas are lightweight, fast, class winners. They are welcome at vintage race clubs throughout the U.S., including such events as the Monterey Reunion. Where can you get a car to race at Monterey in this price range, and one that can win? They are easy and inexpensive to maintain with easily available parts. They can be raced hard, yet also driven on the street for rallies, car shows, and general touring. This particular car also comes with its original street parts – a bonus.  The spares are a major value-add too.

The Elva, and all its extras, needs to be sold due to the economic downturn. If you want the Elva, contact us. We will work something out to get you the car.