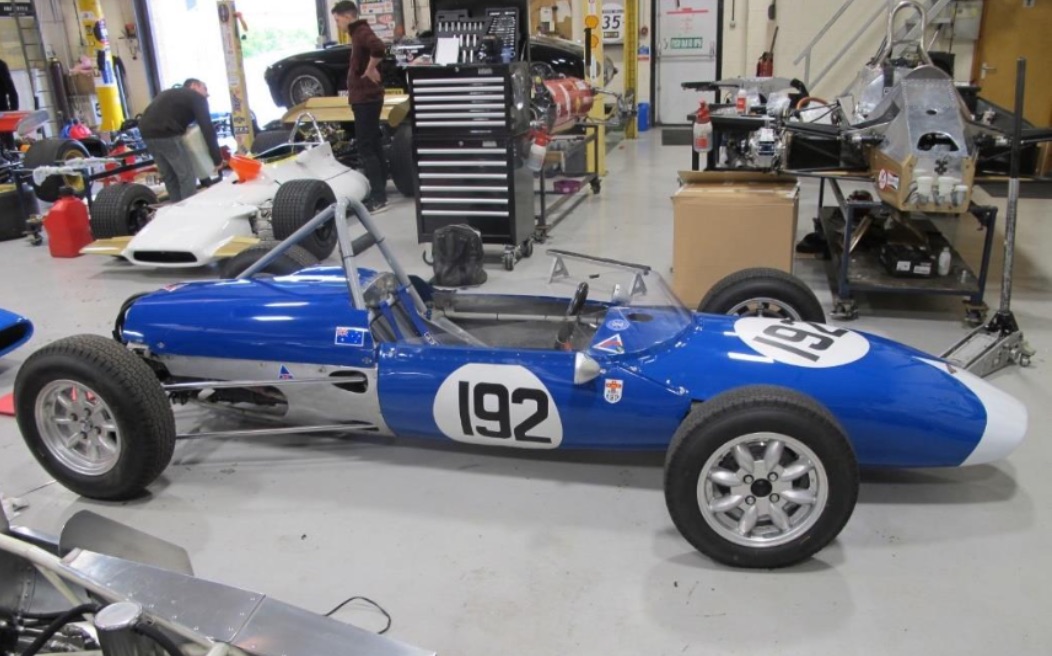 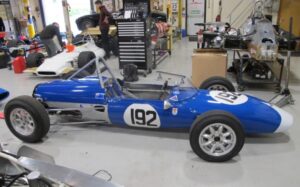 This rare Nota was the first Australian built mid-engined Formula Junior. It was produced by Guy Buckingham’s Nota Cars in Sydney Australia for the 1962 season. By then Nota had already established themselves as a small but versatile marque specializing in single-seat, and sports racing cars.

Buckingham produced the prototype of an expected production run to rival the likes of Brabham, Elfin, Lotus and Rennmax which had previously been the dominant manufacturers in the national Formula Junior Championship.

As this particular car was the prototype Nota it was clothed in an aluminum body (fabricated by Jack Wifton). Buckingham intended to produce the customer versions with the cheaper and lighter fiberglass bodies. The car was originally painted blue with bare aluminum engine side panels. The wheels were a Ron Tauranac (Brabham and later Ralt owner/engineer) design with cast aluminum centers bolted to 1mm spun steel rims.

The Nota was completed in December, 1961. Guy Buckingham took the Nota for its first shakedown run at Warwick Farm in January 1962. In April, Les Howard piloted the Nota in its inaugural race at Oran Park. It won its first time out!

The Nota was subsequently entered in various Australian Formula Junior races by both Les Howard and Norrie Salter until 1963 when it was sold to John McCormack of Tasmania.

McCormack owned the Nota until 1966 and in this time raced it at Baskerville and Symmons Plains Raceways, plus he ran it in the Domain and Penguin hill climbs. During 1965/66, McCormack also fitted a supercharger to the car.

In 1968 chassis 38 was sold again to Geoff Black who ran the car in a variety of events until 1974. Black earned a lap record with the Nota at Symmons Plains in 1968, which was never beaten.

Philip Venables bought the car in February 2003. He raced the Nota at the Phillip Island Classic and then imported it to the UK.

Venebles’ son, Jarrah, next raced the Nota in the 2003 Copenhagen Historic Grand Prix where he finished on the podium. Jarrah also raced the Nota at the 2004, Nurburgring Oldtimer Grand Prix but suffered a DNF due to clutch failure.

Thereafter from 2005-2006 the Nota chassis was stripped, inspected, and repainted, In 2007 the car was invited to compete at the Goodwood Revival (where Philip drove). Unfortunately the Nota suffered a puncture on the first lap! Jarrah then raced the Nota at Angouleme, finishing 2.

In 2008 the Nota was shipped to New Zealand and Australia to compete in the Historic Formula Junior races at Pukekohe. The Nota also raced at Calder and Phillip Island with a best finish of 2nd. The Nota was then shipped back to the U.K. in 2009.

In 2010 the Nota was again invited to the Goodwood Revival. This time the car was raced by former Formula One driver, Desiré Wilson.

The Nota rested for the 2011 season, but was back in action in 2012 at Donnington. Qualifying 4th, the Nota was was off to a promising start until suffering an oil filter problem.

Jarrah next raced the car at the 2013 Silverstone Classic earning a 3rd in class, and a 4th in class at Silverstone. Later that season when scheduled driver, Nick Wigley, who had qualified 4th, was injured in an earlier race at the Silverstone Classic, Joe Colasacco stepped into the Nota. Having not been the qualifying driver, and having never driven the Nota before, Colasacco had to start dead last. Despite the setback Colasacco and the Nota climbed all the way back up to 11th before the flag fell.

Thereafter the car was sold to its current owner. It is currently in excellent condition, and is located in the U.K.  The car comes with HTP papers that are valid through 2027.

2022 is another great year for Formula Junior with championship series across the globe. If you have ever wanted a fully sorted, unique, competitive car to get into the premier events such as Goodwood, Monterey, and others, this is it. The Nota chassis is reminiscent of the well proven, highly successful Lotus 20 FJ, yet it is unique, and extra special with its prototype aluminum bodywork. So you get the best of both worlds with the Nota, proven design, yet a rare and desirable entry for the top events.

On top of the above, what is really impressive to us is that you can now get this opportunity for only $55,000. Where else can you get a great looking, potential class winning, front running Formula Junior that can get you into the greatest race events of a lifetime for only $55,000?

The Nota is currently located in the U.K. and can be inspected there. We can also assist with shipping worldwide. Just provide us your nearest port and we will get you a quote.

Have you ever wanted to race at the Goodwod Revival, the Classic at Silverstone, the Monterey Reunion, or other premier historic events around the world, or just enjoy racing locally? This car can qualify for all of them. It is probably the least expensive, rare, alloy bodied, competitive, drum brake Formula Junior available anywhere in the world.

This is a real opportunity.