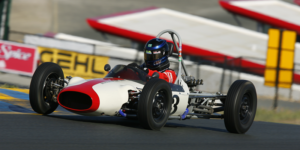 Next came the Mk.2, a rear engine car with drum brakes. It was also BMC powered and came with a VW transaxle. The front lower suspension was a stamped steel production piece from an Austin Healey. The Mk.2 was also very successful, winning the SCCA Pacific Coast Championship.

The Mk.3 followed in 1962 with disc front brakes, and drum rear brakes. The frame was also lengthened. The Mk.3 then evolved into the Mk.3A with rear disc brakes, and tubular front suspension. The Mk.2 and Mk3/3A cars were also sold in kit forms with engine mounts for BMC and Ford 105E engines.

A June, 1963, Sports Car Graphic article introduced the next BMC Junior, the new BMC “Mk.6” model. The article was complete with photos of two of the new machines. One was powered by a BMC engine, and the other an 1100 c.c. Ford 105E Formula Junior engine. The Ford engine car was owned by Marv Webster. The BMC powered car was the ex-works car then owned by Larry Albedi and Chuck Tannlund.

The car offered here was originally thought to be one of the original Mk.6 models, and was restored to the specs in the article. However, subsequent research indicates the Sports Car Graphic article got it all wrong. According to Joe Huffaker Sr. the works never offered a factory Mk.6 model. The cars in the article were period developed Mk.3/3A cars. Both Larry Albedi and Chuck Tannlund confirmed the same. Even the article’s author, Pete Biro, does not recall why he called the cars “Mk.6’s.” The article, however, did feature photos of a genuine Ford powered Mk.3/3A, the Marv Webster car. The Ford power plant in the BMC car was hardly surprising at that time as Huffaker was selling Mk.3 Formula Junior kits with both BMC and Ford engine mounts in 1962 and 1963 because of the popularity, and success, of the 105E engine.

Current research indicates the car seen here was originally a Mk.3, most likely sold in kit form. Pre restoration photos of the rolling chassis show front disc brakes, drum rear brakes, and tubular front suspension. However, the tubular front suspension was likely added after original purchase, perhaps as part of a period attempt to upgrade the car to the Mk.3A/”Mk.6” specs depicted in the magazine article. The car also came with boxes of old parts including a Ford 105E engine, Hewland gearbox, and rear disc brakes, all of which would have been correct for the “Mk.6” model shown in the article. No BMC engine pieces were found.

Since restoration, the car has competed at the Formula Junior 50th Anniversary Jubilee at the Monterey Historic Automobile Races, and at the CSRG Charity Challenge. It is powered by a genuine, Huffaker-built, 105E Ford engine.

During testing in 2010, the car turned lap times that would have put it on the Formula Junior pole for the CSRG Annual 1st event at Infineon Raceway. In 2011, the car actually did claim pole position for the first CSRG race of the season at Infineon, against the fastest Lotus 27 in the U.S., other Lotus 27’s, and a Lola Mk.5A. The Mk.3/6 lead the whole race by several seconds until a misfire developed with just a couple of laps remaining. This car is one of only four Formula Junior cars to have ever lapped Infineon in the 1:49 time bracket. You can see a video of the car in action at http://www.youtube.com/watch?v=w_Qfr9LqcxQ

The car was chassis dyno tested in January, 2014. At that time exhaust gases were discovered in the cooling system. So at this time the car is offered as a running complete car, but one in which the engine will have to be investigated further and repaired. The owner is retiring from racing and is not interested in doing further work on the car.