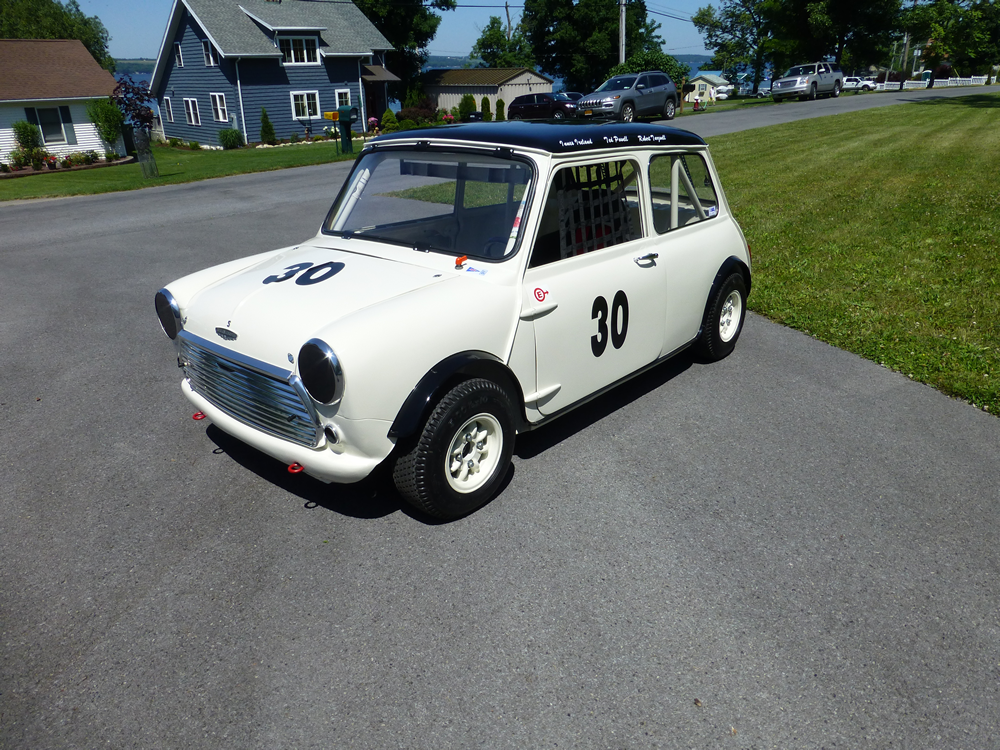 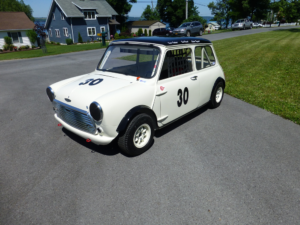 Update: This storied Mini would be a perfect entry, and potential race winner, for the upcoming  Velocity Invitational “Mini vs. Mustang Through Dusk” evening enduro at Laguna Seca, Nov. 11-14.

Update: In addition to the information and specs below, the Mini comes with an additional, new, zero time, 130 h.p.  Swiftune racing engine and gearbox.

This is the ex-Innes Ireland works Mini race car.  It is also the ex-Tom Powell Mini, a multiple time Under 2 Liter Canadian Champion car and 1960’s Trans-Am racer.

The Beginnings of “Pixie”

In 1962, Austin brought several new Mini Cooper race cars to participate in a special, Mini Cooper-only race, held just before the start of the Players 200 sports car race at Mosport, Canada. This was one of a series of Mini Cooper race events that were used to promote the performance and sales of the new Mini Coopers. The cars also ran at Sebring and Lime Rock, and were driven by famous drivers such as Juan Manuel Fangio, Pedro Rodriguez, Innes Ireland, and others.

These events were mostly for entertainment value, including the start at Mosport with Rodriguez and Ireland starting in reverse gear, and going backwards right off the start line. Once headed in the proper direction, Ireland took off in pursuit of the others.  All was good until Turn 5.  Innes overdid it and rolled the brand new factory Mini race car. Undaunted, the car was righted, and Ireland continued on, waving to the cheering crowd through his shattered windscreen.  The race ended with Rodriguez first and Ireland black flagged for making rude gestures to the starter…

Ted Powell, a budding young Mini racer himself, was at the Player’s 200 that day in 1962. At the conclusion of the race he promptly purchased the ex-Ireland car.  He named it “Pixie.”

After repairing “Pixie,” Ted began racing the car all over Canada.  He raced at Mosport, Harewood, St.Eugene and St. Jovite in 1963. He was a consistent top five finisher. His fast pace and consistency resulted in his first class win in the Quebec Championship while also finishing second over-all. Ted competed in every mode of motorsport he could find – ice racing, time trials, rallies, driving skill tests, and economy runs – with great success. 1964 was more of the same with ten first and second place race finishes earning Ted another Quebec Championship.

Ted drove the Cooper in 1963 and 1964 with a 997 c.c. engine.  For 1965 he built the car to 1275 c.c. Cooper “S” specs.  He continued in 1965 where he left off in 1964 – winning frequently and clinching another class championship. He also finished as runner-up in the Under 2-Litre Sedan – Eastern Zone Championship. By this time, Ted was becoming the man to beat in whatever form of motorsport he chose to enter. In 1966, he competed in 28 events – from time trials on ice to the BEMC race at the Canadian Grand Prix. He capped the season by winning the CASC Quebec Region Championship, and was awarded the Alitalia Airlines Trophy.

At the end of 1966, Ted began rebuilding Pixie for the 1967 Trans-Am season. He took the best of Pixie, including its famous Ireland roll over roof, as well as parts from other Minis he had acquired, to build “Pixie 2,” the performance improved version of Pixie 1. Ted then raced Pixie 2 to more class wins and top three overall finishes in Canada. He then took a run at a few Trans-Am races.

His first Trans-Am race with Pixie 2 was at the Bryar 250, at Bryar Motorsport Park in Loudon, New Hampshire. Some 30 cars, including drivers such as Peter Revson, Peter Gregg, Mark Donohue, Jerry Titus, and fellow Canadian Craig Fisher, started this 156 lap; three and a half hour race. Ted finished in 13th in the Under 2 Liter Class, after an off road excursion.  He raced the Cooper again at the 1968 Trans-Am race at St.Jovite.  There he finished 8th in the Under 2 Liter class and 15th overall.

Ted continued his successes through 1968, 1969, and 1970 at Mosport , Harewood Acres, St. Jovite, Trois Rivieres and Deux Montagnes, winning class championships in both Ontario and Quebec. During this time, he invited Gord Brown and Craig Fisher to co-drive with him for several of the longer endurance races and both joined him. By 1974 Ted and Pixie 2 were done, and Ted put the Mini in storage.

Thereafter Ted transitioned from being behind the wheel, to being behind the desk to help organize and run the sport he loved. He became Secretary of MCO, and then President in 1965; he was also President of Quebec Region CASC in 1967.  He was again President of MCO in 1976 and 1977, and then Vice-President of CASC National in 1978. Ted’s experience, logic and diplomacy was very much in demand during the creation of the CASC Pro-Racing division – the forerunner of today’s ASN Canada.

When Ted fully retired from competition, he filled a number of roles – Race Steward for the Rothman’s Porsche Cup in 1987 –’88  and the National Formula 2000 series in 1989 as well as pitching in as a scrutineer, marshal, judge-of-fact, and  race instructor

Summary of Ted Powell’s Racing History, as compiled by the owner:

Number of events competed in:

Upon acquiring Pixie in 1989, Bob Tarzwell undertook an extensive restoration and race prep of the car. See in the “Description” section below.  Bob and Pixie raced all over the Eastern seaboard, with the Mini taking many victories outright. Pixie also participated in Trans-Am Reunion races and many Enduro’s, winning most of them. Pixie also competed in SCCA’s GT-5 class, helping Bob capture Rookie of the Year honors. Bob raced Pixie in 150 events from 1989 to 2002 in Vintage, Club Racing and SCCA GT5. The car won everywhere and has a 40 percent podium ratio.

This is a 1962 Cooper  updated  in 1964 to “S” specifications by BLM works. It is Old English White with black roof. It comes with12 original magnesium Minilite wheels and one set of rain tires. The car is equipped with lightweight  aluminum calipers and “S” rotors.  It also has extra strength “S” racing drive shafts and pot type U- joints.  The front sub frame has been welded and strengthened. The front suspension has also been lowered. It has Spax race shocks. The car also comes with the following features and bits:

Pixie underwent a complete rebuild, with new paint, and many new parts with the last owner. The current owner has raced the car in a handful of races since, including the Monterey Reunion. As mentioned above the car can continue to race with engine described above, or with the new Swiftune engine and gearbox. It is your choice.

This Mini is well built, well sorted, fast, and has been very successful in both period and vintage racing. It is one of the quickest, most successful, Minis ever.

To see more photos of the Mini in recent action, please check out the following links: