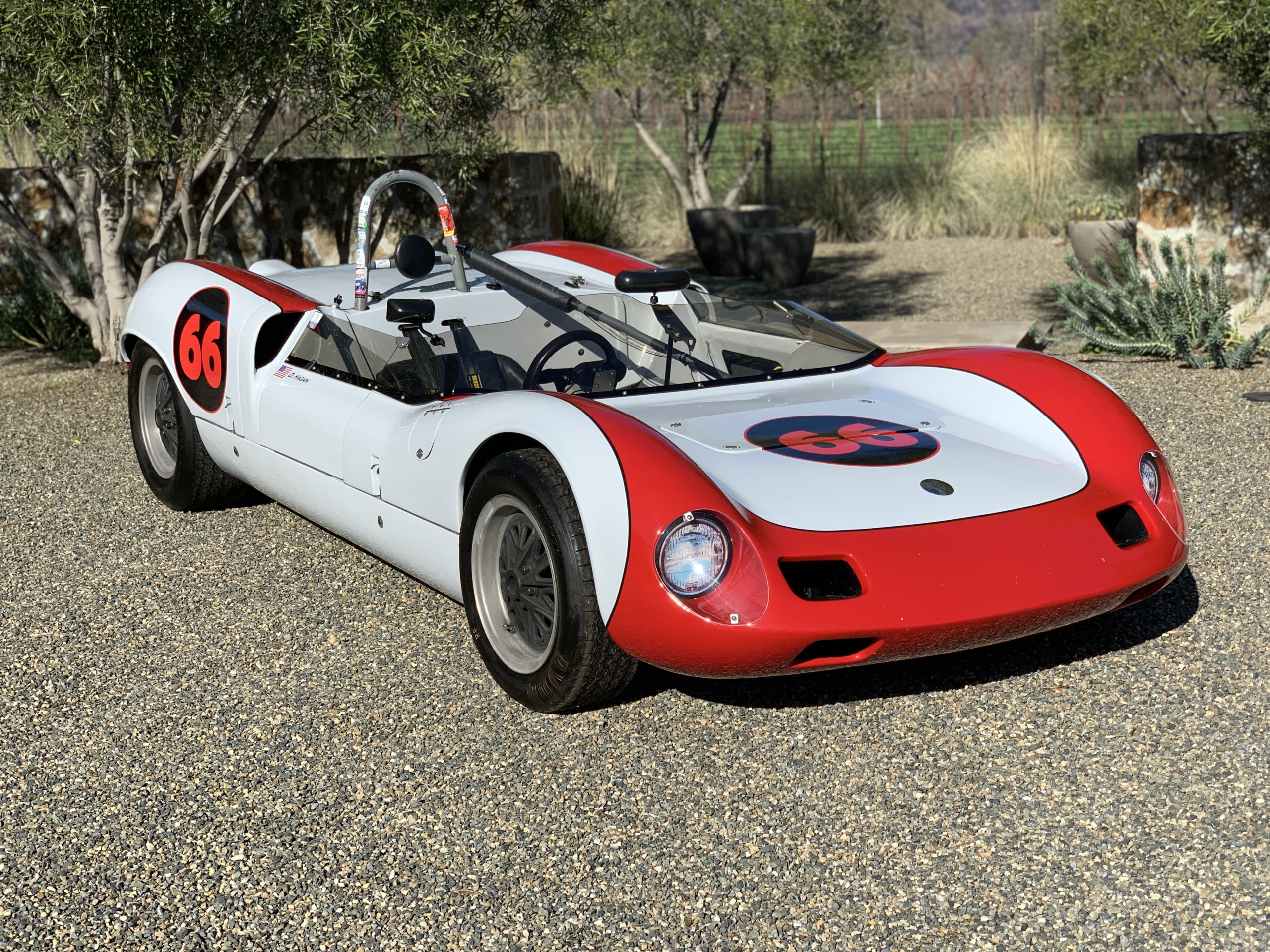 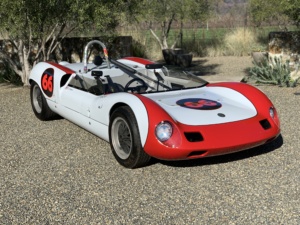 Elva began building the Mk7 models in 1962. Over the next several years they were highly successful, beating Lotus 23’s, Brabham BT8’s, Merlyn Mk6’s, and more, winning races and championships along the way.

This particular Elva, chassis 70/023, was originally delivered from the Elva works to U.S. Elva distributor, Carl Haas. It was powered by a 1.1. liter Coventry Climax engine at the time. Haas raced the car himself before selling it on to a customer.

Thereafter, the early history of 023 remained a mystery until 2013.

At the 2013 Monterey Reunion, Bobby Rahal noticed the Elva listed in the event program. He recognized the chassis number 023. That was his dad’s old car. Bobby came looking for the Elva’s current owner in the paddock. He introduced himself and said “O23 was my dad’s car that he raced when i was a kid.”

Bobby graciously followed up by sending the owner period photos of the car, and a program from Road America in which the Elva appears with his dad driving.  Bobby’s correspondence, photos, and documents will be provided along with the Elva.

Bobby was able to provide some quality information about the Elva’s early racing history. According to his family’s records, Bobby’s dad, Mike Rahal, purchased the Elva from O.M., “Mac”, MacLaren in 1964-early 1965.  Mike raced the Elva in the G Modified class in U.S. Midwest SCCA races during 1965 and 1966. Rahal won the 1965 SCCA Western Division G Modified race at Wilmot, He also finished 14th at the 1965 Road America 500, and 8th in the 1966 edition of the race.  A photo of Rahal racing the Elva (being passed by Skip Hudson in the Lola T70) at the 1966 Road America 500 is included below.

Fast forward to 2012. That is when the current owner purchased the Elva. The Elva had been in storage in the Chicago area for the prior 20 years. Its earlier history had been lost, and was unknown until the chance discovery of 023 by Bobby Rahal mentioned above.  However, even in 2012, the Elva still retained its three original chassis tags, all with the same 023 chassis number. Those tags are still on the car’s original chassis today.

After the 2013 Monterey Reunion, the Elva was raced in vintage events approximately 3-4 times per year. The car competed in the Group 4, under 2 liter sports car category, and accomplished race wins and many podium finishes. The Elva was last raced in April, 2019.

The Elva is currently powered by a 1600 cc, Dave Vegher built, Lotus twin cam with 45 DCOE Webers and MSD ignition. The engine has only two race weekends on it. Redline is conservatively set at 8,600 rpm.

The twin cam’s power is transmitted through its five speed Hewland Mk.4 gearbox. The rear axles are splined with U-joints mounted at both ends for durability. Oil is carried through Aeroquip steel braided lines and fittings.

The Mk.7 rides on six lug Elva wheels with 5.0/22.0 x 13 Avons in the front and 6.5/23.0 x 13 Avons in the rear. Handling is assisted by Koni double adjustable shocks, and front and rear sway bars. Braking is four wheel Girling disc brakes.  Engine cooling is by twin radiators up front, which enhances stability and handling while keeping the twin cam cool.

A fully functional Traqmate  GPS data acquisition system is fitted to the car, along with a hard wired transponder. The safety belts are Schroth, and need to be replaced as they have now timed out. The Elva has a Fuel Safe fuel cell, and an S.P.A remotely operated fire suppression system.

The Elva will come with a history file including photos and records of the car going back to its early days when first raced by the Rahals. The file will also include many comprehensive receipts for the work done to the car.

Incidentally, the photo that shows Mike Rahal sitting in the cockpit of the then red Elva also shows someone in a white sweater standing behind the right rear corner of the Elva. That’s future F1 driver, Indy 500 winner, and IndyCar Champion, young Bobby Rahal.