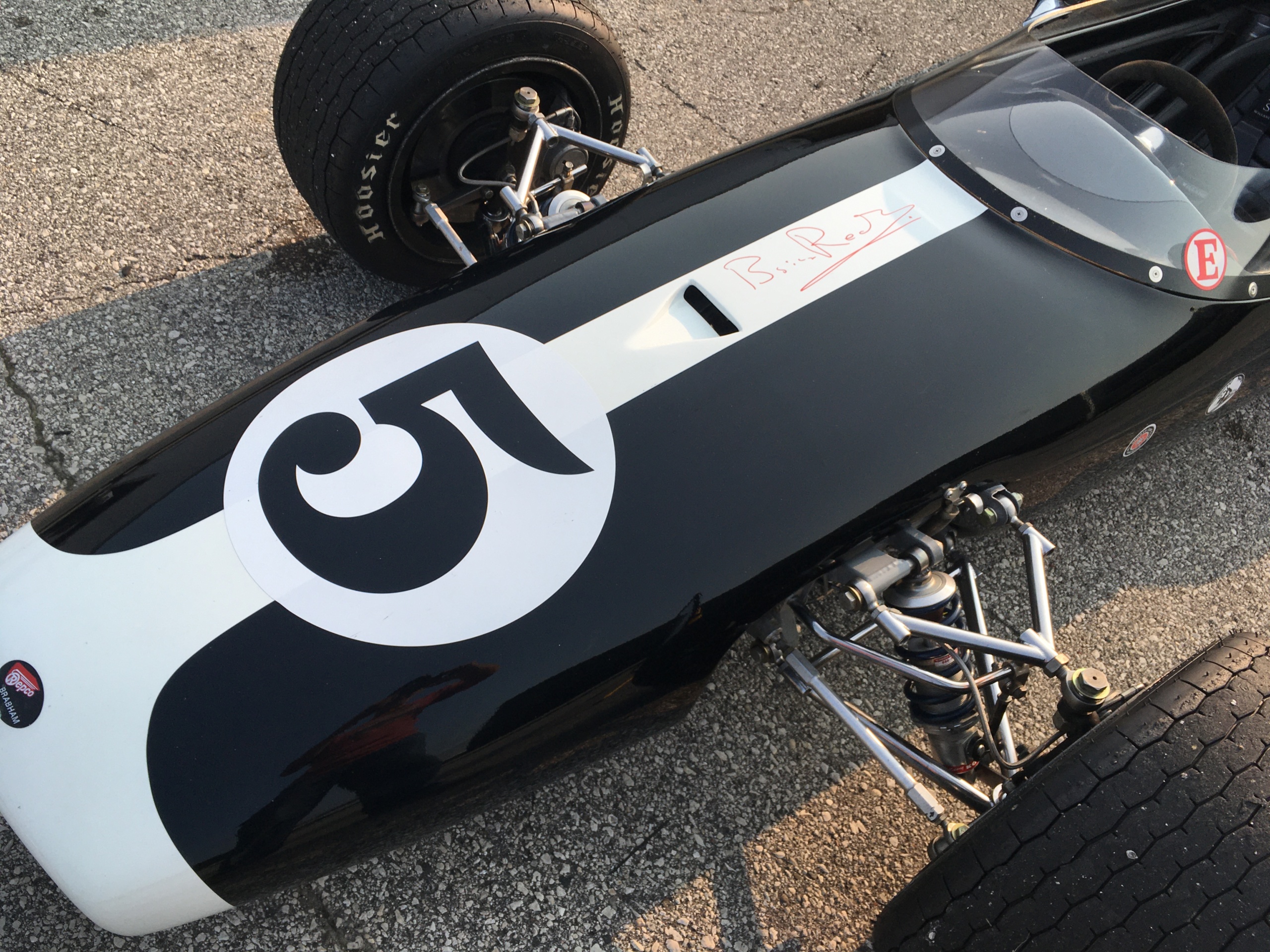 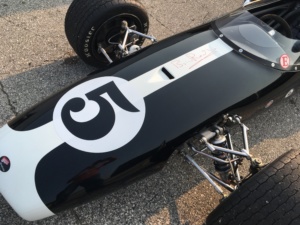 F2-23-65 was sold by the Brabham works to Frank Lythgoe Racing. The car began its racing career at the British Eagle Trophy F2 race at Race Brands Hatch in 1965. Bob Anderson drove the DW Racing Enterprises Ford Cosworth SCA powered Brabham BT 16 to 9th place. Jim Clark won in a works Lotus 35 followed by Dennis Hulme and Jack Brabham, both in works Brabhams. To see photos of this race, go to MotorsportImages.com. To see a photo of F2-23-65 specifically go to the bottom of Page 2. F2-23-65 wore the number “70” for that race.

Anderson raced the Brabham again in 1965 at the XII International Gold Cup at Oulton Park, but suffered a DNF.

For 1966, the Brabham would be raced by future F1 driver, John Taylor. Taylor finished 11th at the B.A.R.C. 200 at Oulton Park. Taylor also raced in the Sunday Mirror Trophy race at Goodwood, but suffered a DNF along with Jackie Stewart, Jackie Icx, and Jim Clark. The race was won by Jack Brabham.

The Brabham would complete its 1966 F2 season at the hands of Mike Beckwith. Beckwith finished 8th in his only race with the BT16 at the London Trophy Race, held at Crystal Palace.

In 1967, Brabham F2-23-65 was acquired by David Bridges Motor Sports. Bridges, aware of Brian Redman’s excellent 4th place finish at the 1966 Spa 1000 Kilometers in Peter Sutcliffe’s Ford GT40, offered Redman the seat in the F2-23-65 for the 1967 F2 season. He told Redman “If you want to turn professional, lad, I’ll pay you 30 quid per week guaranteed for a year.” Redman accepted the offer for what would become the first professional drive of his career.

This driving for pay was a big step up for Redman. According to Redman, Sutcliffe congratulated young Redman at the conclusion of their 4th place result at Spa and told Redman “ ‘You see all these empty Coca-Cola bottles up and down the pit lane? Be a good chap and collect them and get the money back on them.’ So I spent an hour collecting empty Coca-Cola bottles to get Peter the money back on them.”

Redman raced F2-23-65 in 1967 at the Nurburgring, Montjuic Park, Mallory Park, Zolder and Crystal Palace with the under powered SCB engine. His best finish was 8th at II Grand Premio de Barcelona held at Montjuic Park in Spain.

In January of 1968, F2-23-65 was sold onto Rob Leeson. During Leeson’s first race with the car at Brands Hatch in February, the Brabham sustained accident damage, and was a DNF. Leeson then took the car to Arch Motors for repairs.

While at Arch Motors, Leeson had the BT16 updated to BT21 rear suspension (period receipt available). Because the BT21 uprights were taller, Arch Motors moved the pickup points on the chassis to best accommodate the new uprights. The original pickup points are still there. AM also installed a 1600 c.c. twin-cam engine at that time.

In September 1968, Leeson raced the newly updated Brabham at the GB Formula Libre Race at Silverstone. He won. A week later he captured his second Formula Libre win at the Rochester Trophy Race at Brands Hatch.  Shortly thereafter he packed up the Brabham and shipped it to Canada to start the next chapter in the life of F2-23-65.

In November, 1973, Pierce Isaacs sold the Brabham to Kevin Skinner. In July, 1978 Skinner sold the BT16 to Simon Gardener. The twin cam was sold separately.

In November, 1979, Gardner sold the BT16 to Jerry Ives with a twin cam in good running order. The color was changed to red w/white wings. In February, 1985,  Jerry Ives sold the Brabham to Bob Micheletti.

Michelietti’s recollection of F2-23-65’s history is reflected in a discussion with Allen Brown at TenTenths.com. Micheletti would go on to restore F2-23-65 and then win the VARA (Vintage Auto Racing Association) Single Seater Championship in Southern California with the Brabham in 1986. It was during this time that the logbook was signed by Sir Jack Brabham at a race at Palm Springs.

In January, 1988, Micheletti sold the Brabham to Christopher Legette. Leggett had the car gone through completely by Rick Cresse and Kevin Bollinger of Vintage Racecar Restoration. The engine was built by well-known twin cam specialist, Dave Vegher, and the car painted red with a white stripe.

Leggett raced the car for several years before selling the Brabham to David Long in December, 1993. Long painted the BT16 black and raced it in several VARA events in Southern California.

In November, 2000 Long sold the Brabham to Bob Roth. Roth retained the BT16 until selling it to its current owner in 2016.

The Brabham was restored again and has been raced successfully ever since, including many podium finishes as well as outright wins through the 2021 season.

Chassis F2-23-65 remains highly original. Original pieces include the frame with AM71 stamped into it. Most of the bodywork remains original. The radiator and the calipers are original to the car with the calipers bearing ’65, ’66 stamping.  The original hand hammered alloy long race fuel tank and the short race tank also come with the car.

Below is the description, directly from the owner, regarding the most recent restoration of F2-23-65:

“When I bought the car in 2016, Bob Slade made some room for me in his shop and we went through the whole car. There were a few small cracks in one of the front upper pickup points and the down tubes on the frame where the engine mounts go were cracked. The pickup point was repaired and the down tubes and engine mounting points replaced using original  nickel bronze welding by Dennis Muir (ex Shadow fabricator). The frame was then touch up painted where repaired. (No powder coat).

A new 5 gallon ATL fuel cell was fitted behind the seat with the container also fabricated by Dennis Muir. All bearings, rod ends, uprights, vertical links, suspension parts, motor-mounts, wheels, and steering were dismantled, magna fluxed or zygloe’d, and repaired or replaced. Specifically the vertical links and one of the uprights were replaced even though they tested ok (they remain with the car as spares).

We went through the MK8 gearbox and replaced bearings, hockey stick, shafts, and gears (all having been crack tested). The MK8 carries 1st gear on the shaft which is what was used for the standing starts in EU. We dyno’d the engine but did not dismantle it at this time. New Koni shocks were fitted, new battery, all new fuel lines, brake lines, and fire system. Even the pedals were disassembled, crack-tested, and re-bushed. Many hours were spent re-aligning the engine and gearbox to the frame. New rotors were made by Coleman and new caliper prisons and seals provided by Ray Hulbert.

The above rebuild went from November of 16 until 3 am on May 19th, the night before the inaugural Spring Classic at Laguna Seca. We (Bob, Nick, and I) actually left the shop at 3am and Nick and I came back at 7 am and put the setup on the car. We put it on the trailer, and went to Laguna for the race. On Sunday, having never driven the car before this weekend, we won the main event against a strong field of formula B’s. All we changed all weekend was air pressures. Just one of those weekends you always work towards.

The car has won at least one race every year and been on the podium in most events even against the BT35’s. The car runs 1:33’s at Laguna and 1:42’s at Sonoma.

In 2018 we built a new twin-cam for the car. The one that came with the car couldn’t be bored without ending up over sized. We bought a new block, head, pistons, rods, carburetors, etc. All engine work was done by Bob Slade. We used NO modern electronics. No MSD. Just Lucas control box and points as original. The car has an SVRA GOLD MEDALLION  for originality.

We last ran Laguna, Road America (twice), and Utah in 2021. Brian Redman signed the top bodywork on the car at the Road America event in July, 2021. (See Photos).”

Rob Leeson met with the current owner several years ago at a vintage racing event where the Brabham was competing. He gave the current owner the original steering wheel for F2-23-65 that he removed decades ago as a souvenir from his time with the car.

Leeson was joined that weekend by his mechanic on F2-23-65, Mike Cullen. Cullen is the one who effected a repair to the BT16 after it was damaged in an accident at Westwood. He could still identify the car based upon the repairs he made back in the late 1960’s. In addition, he said that the original breather/catch-can on the engine is the same one that was on the car when they raced it. The journal Leeson and Cullen started for the car back when Leeson raced it is still with the car today as well.

The Brabham raced in the iconic era of Formula 2, both in the 1000 cc era as well as the 1600 cc era. It then raced, and won, in both Canadian and U.S. Formula B. Its vintage racing career has also been marked with success, winning a vintage racing championship in 1988, and continuing to win races through 2021.

The Brabham has been restored and maintained by a pro shop. The car’s consistent podium finishes speak for themselves. The car is still actively being campaigned, so please contact us regarding the current amount of time on the engine and gearbox.

F2-23-65 is a highly documented car, way beyond most formula cars from this period. Every owner is known. Period race results are documented. Vintage race results are documented. The Brabham comes with multiple period newspaper articles of the car’s exploits. Period bills of sale are included. Period work orders and receipts are included, even those from Arch Motors documenting the updating the chassis to BT21 rear suspension specs and the twin cam 1600 cc engine. There are also numerous photographs of the most recent restoration, and more.

Right now the Brabham is enjoying great success racing in Historic Formula B in the U.S. It can race from Laguna Seca to Lime Rock with HMSA, CSRG, VARA, SOVREN, SVRA, CVAR, HSR, etc.

If you are looking for an authentic, historically significant, well prepared, highly documented, period and vintage race-winning formula car from the classic 1960’s formula car period, you have arrived at the right place. Please feel free to contact us for further information and documentation.