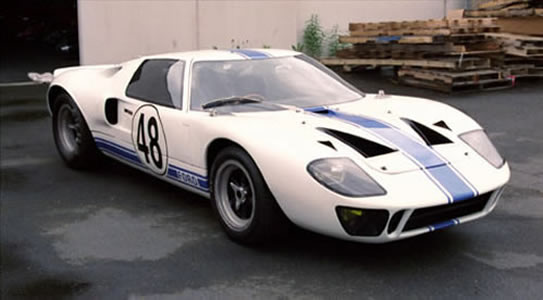 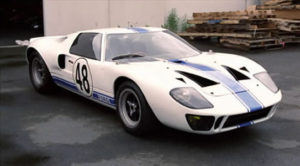 GT40 Ford, chassis #1048, was completed 5/24/66. The original Production Car Record Sheet, issued by Ford Advanced Vehicles of Slough, England, lists the first principal customer as Umberto Maglioli – winner of such races as the 24 Hours of LeMans, Targa Florio, and the Carrerra Panamericana.

After initial shakedown testing by Innes Ireland at Goodwood, the car was delivered to the Italian racing team of Scuderia Brecia Corse for competition use.

On August 7, 1966, Casoni set the track record and placed #1048 on the pole for the Enna Cup race at Pergusa, Sicily. Right rear suspension failure caused the car to retire on lap 53 of 70.

In September, Casoni and #1048 finished 7th in the Austrian GP at the Zeltweg aerodrome. In October, Nino Vaccarella, also a winner of the 24 Hours of LeMans, qualified #1048 third quickest for the Paris 1,000 kms at Montlhery. Unfortunately, #1048 slid off into a ditch during the race, sustaining minor damage, but ending its day.

In 1967, #1048 received cosmetic modifications. Its original U.K. street license plates were removed, and white number roundels were applied to the nose and doors. Maglioli and Vaccarella co-drove #1048 in the Reims 12 hour race that year, but retired with engine failure. On August 6, 1967, the Scuderia Brescia Corse GT40, #1048 won the Enna Cup at the hands of Vaccarella. Vaccarella and #1048 averaged over 130 mph for the 187.74 mile distance.

After its Brescia Corse career, #1048 was sold to the German Ferrari specialist, Willy Konig. Koenig modified #1048 by widening the rear bodywork, flaring the sills, and attaching canard fins at the front sides of the nose. Konig entered the car at the Nuremberg 200 Miles race at the Norisring in June, 1969. A failure in practice resulted in a DNS.

Jean-Pierre Rouget and Herve Bayard entered #1048 in its Konig-modified form in the Paris 1,000 kms in 1967. However, #1048 failed to start. A week later in the Casablanca G.P., Rouget crashed the car. #1048 survived the mishap and competed in further French events during the 1970 season.

In 1971 the tail bodywork section of #1048 was further modified, similar to the 917 Porsches of the period, with the taillights relocated on the frame on each side of the exhaust pipes. The car was raced in this configuration at LeMans in the 3 hour race on April 18, 1971. The car caught fire and was severely damaged.

Lucchini subsequently commissioned Ronnie Spain, noted GT40 Ford expert and author of GT40-An Individual Race History and Race Record, Osprey, London, 1986, to inspect the Lucchini car to determine its authenticity. That inspection, the ensuing lawsuit against Sbarro, and the results of that lawsuit are set forth below in the excerpt on GT40P/1048 from the Shelby American World Registry.

Since the last publishing of the Shelby Registry in 1997, GT40 #1048 was sold by Lucchini to the current owner.

Within the past few months, Ronnie Spain has prepared a new, detailed, and definitive report on the authenticity of #1048. This report contains information not available to the Shelby Registry at the time the Registry was last published. A copy of this report can be made available to seriously interested parties for review.

GT40 #1048 was delivered to the first owner with the factory 289 Cobra engine, serial number 52183. It had Borrani wire wheels with Goodyear racing tires. A spare set of 8.5 inch and 10 inch FAV wheels were supplied as spares. The GT40 was fitted in standard race trim with added rear brake cooling ducts. The bodywork was finished off in red with white sill stripes and “FORD” lettering. The car was wore the English registration tag, PKX 852D.

GT40 #1048 is now in fully restored condition and finished in white. It is powered by a 289 Ford engine with Gurney/Weslake heads and Weber carburetion.