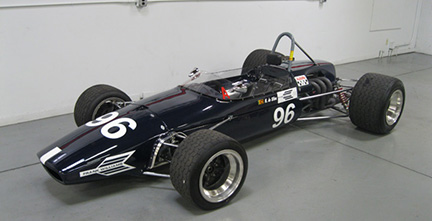 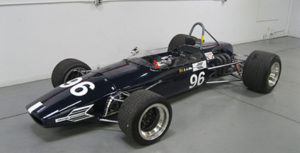 This is an original Frank Williams team car, chassis number BT23C- 12, and is one of 13 made. This Braham raced in the European F2 Championship, in the heyday of F2 racing, when many of the worlds top drivers could be found in the cockpit of F2 machinery, including Jackie Stewart, Jim Clark, Jochen Rindt, Francois Cevert, Piers Courage, Graham Hill, Jackie Ickx, Henri Pescarolo, Jean-Pierre Beltoise, and many others. Jochen Rindt dominated the European F2 series in 1968 racing a BT23C.

BT23C-12 was originally driven by Corrado Manfredini for the Williams team in the 1968 European F2 Championship. No significant result have been reported. In 1969, Malcom Guthrie took over BT23C-12 and raced it for Williams. Guthrie raced the car until June, 1969. Like Manfredini, Guthrie’s results during that period were unremarkable. In June, he switched to a BT30 F2 car.

Bob Gerrard Racing acquired BT23C-12 in June, 1969, and the fortunes for the car began to change. Robbin Widdows finished 13th for the new team at the June 8th European F2 race at Zolder. A week later, Brian Hart (soon to be successful engine builder in his own right) won with BT23C-12 at the Hockenheim F2 race. Widdows then got back in the car and won the Grand Premio della Lotteria F2 race at Monza on June 22nd. He won against a pretty stout crowd of drivers, including Cévert, Ronnie Peterson, Clay Regazzoni, Derek Bell, and others.

At the Grand Prix de Reims, Widdows came second to Cevert, but ahead of Courage, Stewart, and Pedro Rodriguez. Widdows finished 5th at the Gran Premio del Mediterraneo. Graham Hill won the Grand Prix d’Albi in September 1969, with Widdows sandwiched between Ronnie Peterson and Cevert for 6th.

The ownership history for the car after Tyack is reported by Allen Brown of the F2 Register as follows:

The racing history of the car post 1970 has not yet been done.

BT23C-12 was most recently raced in November, 2013, at the U.S. Grand Prix Formula Vintage support race held at the Circuit of the Americas in Austin, TX. To see a video of the car, please go to: http://www.youtube.com/watch?v=GU8aYZkyiC4

The car has been fully restored and is maintained in excellent condition. The car has run both a 1.6 liter Cosworth FVA, and a Lotus twin cam. The twin cam was in the car at its most recent outing, the Formula Vintage Race at the Circuit of the Americas in November, 2013. The car is now in its original F2 configuration with a new, dyno time only, FVA engine installed. The gearbox is also a fresh Hewland FT-200 five speed.