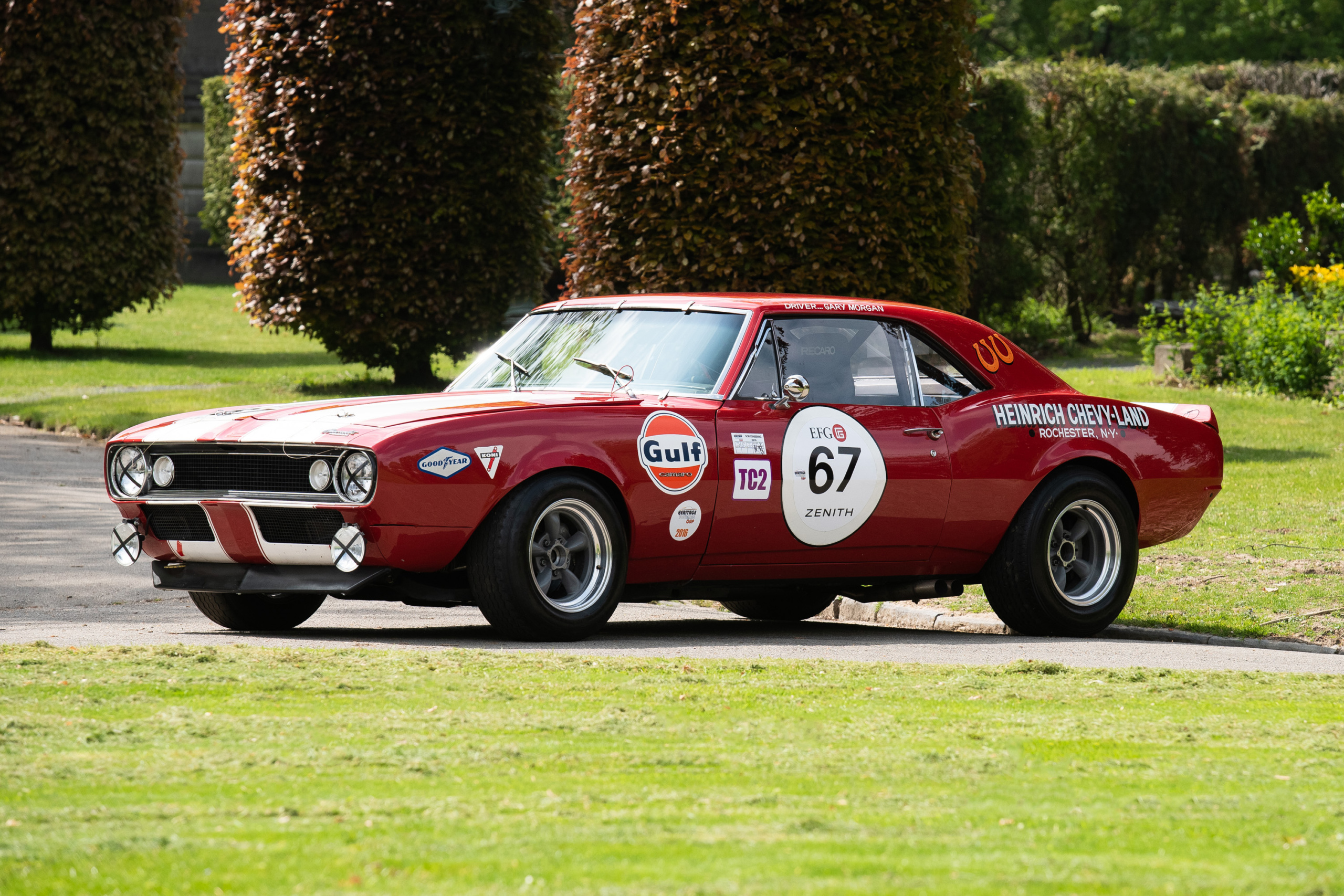 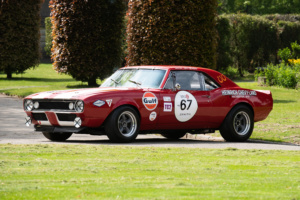 This is the 17th of the original 25 Pre-Production Z/28 Camaros built. The pre-production Z/28’s were purpose built by Chevrolet to compete in the SCCA Trans-Am Series. The Z/28 model won the Trans-Am Championship in 1968 and 1969, including 1st in class at the 1968, 12 Hours of Sebring, at the hands of Mark Donohue and Roger Penske.

The Z/28 offered here is the factory supported, ex-Gary Morgan/Heinrich Chevrolet, race car. It too had a successful racing career, competing in the Trans-Am series and also winning the Area 11 SCCA A-Sedan Championship in 1968. The Z/28 also went on to finish 4th overall in the Fingerlakes Region SCCA Northeast Division. The car’s successes would lead to it being featured in Gulf Oil television commercials that ran during the 1968 political conventions, and the astronauts landing on the moon in 1969.

For a wonderful, highly informative, first person account of the car’s early history, please see the 2011, Gary Morgan Interview by Jon Mello of the Camaro Research Group. The interview takes us all the way back to the fall of 1966, when Morgan, his dad, and Jon Heinrich went to Chevrolet in Detroit to see about getting one of the brand new Z/28’s to race in SCCA. The interview chronicles in surprising detail the exploits of the team over the next several years.

The interview contains numerous period photos from the Gary Morgan collection and others. Also included are more current detailed photos of the car.  Additional photos can be seen throughout the links highlighted below. We expect to receive more photos as well.

Below is a summary of the car’s history post Gary Morgan. This includes the Z/28’s later racing history, rediscovery, restoration, and authentication by Gary himself. This information was obtained from published reports by the Camaro Research Group mentioned above, as well as other sources including prior sales information and racing records. Documentation substantiating the car’s history and authenticity will come with the car.

After the 1969 season Gary decided to retire from racing and gave the car back to Heinrich Chevrolet. Heinrich tried to entice Gary back into the driver’s seat with offers of new cars to race, but Gary had had enough. Heinrich Chevy sold the Camaro to Kent Fellows, and split the sale proceeds with Gary.

Fellows went on to race in Trans Am with famed fellow Camaro racer, Warren Agor in 1972. However, Fellows may have also had a 1969 Camaro at that point, so it is unclear at this time if Fellows raced the Morgan Z/28 in 1972, or a different 1st generation Z/28.

As a postscript to the 2011 Gary Morgan interview, Jon Mello went on to write;

“This Gary Morgan ’67 Z-28 was indeed raced by Kent Fellows in the early ’70s but I believe he had a ’69 Camaro as well.  Don Wattie restored the car and never raced it. It was sold to a few people who also did not race it but a few years ago it was sold to an owner in Europe who raced it over there.  I have heard that the car is now up for sale and the owner would like for it to return to the US.”

“My wife and I are currently travelling around Europe. I visited the Autworld Museum in Brussels yesterday, and this (Morgan’s Z/28) was among the cars on display.”

A parallel but more detailed version of this car’s post-Morgan history and specification was included in a prior sale of the car by RK Motors. That history is summarized below. The actual article, and more photos, can be found at RK Motors – 1967 Z/28 For Sale

When the Morgan Camaro was discovered, it still had nearly all of its original Bolero Red paint, except for one repaired quarter panel. The new owner recognized the car’s “4P” branded cowl tag as something special and began to trace the car’s history. It was Gary Morgan’s old SCCA Trans-Am/A-Sedan race car.

A full frame-off restoration was undertaken (started in the early 1990’s). The Camaro was restored back to its 1968 livery, including its 1968-spec D80 front spoiler.

Motorsports Market Note:  The Camaro has been offered for sale in the past with its “original 302 engine”. The engine currently in the car, the spare engine, and the spare block that come with the car are not matching numbers to the car. The current whereabouts of the original engine, if it exists, are unknown.

So, back in 1968, the newly rebuilt engine included an exceptionally rare cowl plenum induction system that forced air to two correct Holley list 4295 4-barrel carburetors through an early 1968-spec Winter cross ram intake. The engine had its correct double hump heads and an authentic set of Stahl headers. The period correct engine bay was then highlighted by Gary Morgan’s signature when he came to see the car and authenticate it.

Motorsports Market Note: In  1968, two new “Service Options” were available. These you could purchase at the dealer’s parts counter and install yourself. These included a four wheel disc brake package, and the dual four barrel intake. The Morgan car has both of these.

The interior had a full roll cage. Also included was an oil accumulator for the wet sump oil system and a Hurst T-handle shifter. The radio and heater delete dash panel had a second Gary Morgan autograph.

The Morgan Z/28 was sold with substantial documentation that will come with the car today. They include a binder full of historic clippings, vintage photos and official judging sheets. Also included are letters of authentication from both Gary Morgan and Jerry MacNeish. Photos of Gary Morgan signing the car will be included. There is a copy of Gary Morgan’s official race record. Further  a list of previous owners will be included. Copies of Super Chevy and Chevy High Performance magazines featuring Gary’s Z/28 will also be included. There are an additional three DVDs of vintage race footage as well.

In addition to the foregoing, this car won the 1992 Illinois Camaro Club “Best of Show” award, and claimed the U.S. Camaro Club Gold Award of Excellence, scoring 979 out of 1000 points.

The Z/28 has been prepared to a very high standard, and used very little since. The Z/28’s most recent race was the 2105 Peter Auto/Heritage Touring Cup Spa Classic. However, it is a true Trans Am car which competed in the June 11,1967 Mid-Ohio Trans-Am. Its highest and best value is here, in the U.S., where it currently resides. Because of its history, the car qualifies for acceptance in the highly regarded Historic Trans-Am Series.

There are only 80 genuine Historic Trans-Am Cars listed on the Historic Trans-Am website. We do not know, specifically, how many total cars raced in Trans-Am, but owning one of 80, or thereabouts, puts this car in very rare company as a vehicle investment. When you add in its additional Pre-Production, first of the vaunted Z/28 Camaros ever built and raced, it gets quite a bit more rare. It’s sister Penske car also won the Trans-Am Championship.

All vehicle descriptions are accurate to the best of our knowledge at the time of writing. Corrections, and supplemental information, are always welcome. Buyers are responsible for confirming vehicle histories, condition, and authenticity to their own satisfaction prior to purchase. Motorsports Market is not the owner of the vehicle and is not liable for errors or omissions.