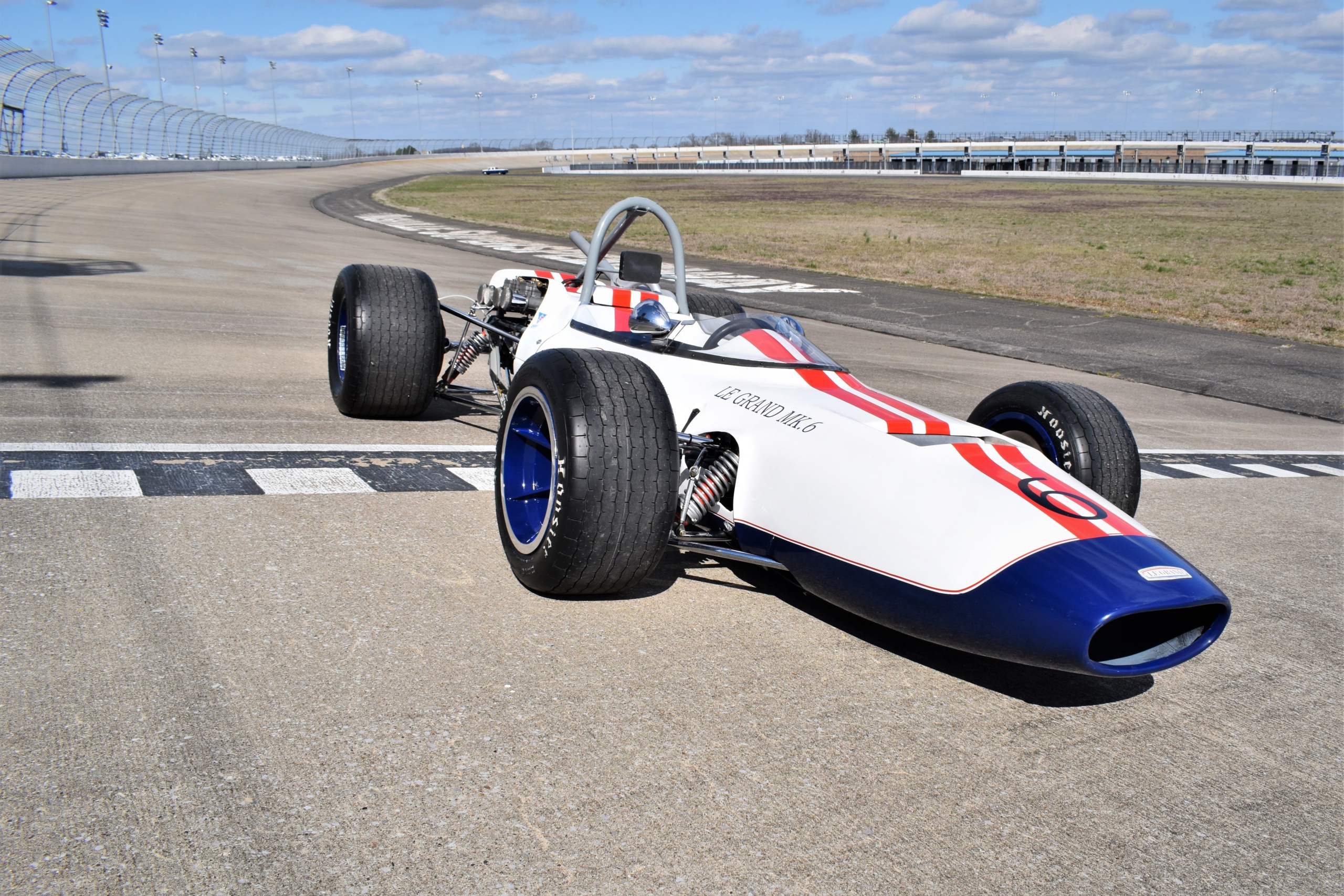 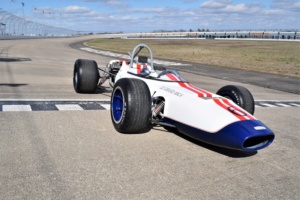 History as provided by the owner:

Aldin “Red” LeGrand led a colorful and varied life before becoming one of America’s most prolific race car builders. As a young man he played a horn in a jazz band in San Francisco, and he was good at it.  With the outbreak of World War II he joined the marines and spent the war in the front lines on the beaches of the pacific theater. Red stayed in the Marines through the Korean conflict, leaving the service with honors as a drill instructor at Perris Island. He moved to Los Angeles and took up roots. Red began studying engineering and started his family.  While working in the aerospace industry, making memory drums, he discovered the fledgling Southern California sports car racing scene. Red, Stuart Dane and Neil Hillier all worked together, and were soon helping each other build cars and raced them under the banner of the Formula Racing Association.

Red was a master craftsman and he had an “eye” for what would work.  The modus operandi at LeGrand Racecars was for Red to work as the master fabricator, collaborating with a designer, and giving input as needed.  The history of LeGrand can be segregated into periods corresponding to the tenure of the designer.

The success of LeGrand Race Cars would ebb and flow over the years, perhaps influenced as much by the relationship between Red and the chief designer, as by any other factors.

In 1967 Red was putting together the latest model, the Mk6.  Essentially a production version of the Mk5, the Mk6 was designed to replace the Mk3.  The Mk6 was a FB or FC depending on the engine installed.   It is a bigger car than the Mk3 and came stock with 7.5 x 13 in front and 9.75 x 13 rear wheels and soon growing to 11 x 13’s by mid-1967.  A number of these cars are thought to have been produced, however there is very little specific competition history.  1.6 liter Lotus and Alfa twin cams were the power plant of choice for FB.

Description as provided by the owner:

I purchased this car in 2018 as a complete car but it was never finished or fully assembled, and hence never raced during its 51 years since first built by LeGrand Race cars in Sylmar California.  The car had been through three owners prior to my purchase. It had spent most of its life in Texas with the second owner being former Team Lotus 41 driver Harold Kretch.  Harold was team mate of Gus Hutchison during the mid to late 60s driving for Lotus.  The reason Harold bought the car was he was a personal friend of Reds and wanted to have one of his cars for himself.

Al James of the Official LeGrand Registry feels this MK6 is the most original one he has seen.  This LeGrand MK6 FB is basically what you would have purchased from LeGrand Race Cars in 1967. It is a virgin race car fit for a museum or to be used on the track. The only changes which have been made to the car are the roll bar hoop which is taller to pass more modern racing standards, new Hoosier FB tires, quick release steering wheel mount, and an LED rain light.

Harold Kretch was also a business partner of Gus Hutchison in HRE engines building the majority of the series winning Lotus motors.  At that time they were the motor to have. Harold built the motor in the LeGrand and he told me it was built with special attention as this was his motor. The motor was dyno run only by Harold to ensure it was what he wanted and had in excess of the usual 185hp which was about standard for HRE Twin Cams.  The motor was then placed in the LeGrand. However that was as far as it would go.  The car was never finished or raced and sat for many years in a controlled environment and turned over to ensure it did not lock up.  The motor is basically an NOS HRE motor which had the pan and head removed for inspection of the bearings and bores etc, re-gasketed and put back together. It has the Lotus L block with forged Cosworth rods, forged HRE custom pistons, and is fully balanced and lightened to ensure reliable sustained high revs are achievable. The head has extensive porting with HRE race cams and valves with fuel and air mixture supplied by rebuilt twin Weber DCOE 45 carburetors. The motor has signature HRE finned aluminum pan, fuel pump block off, and oil pump. Original sand bent headers exit the gases from the motor.

The zero hours Hewland five speed transaxle was sent to Taylor Race Engineering and completely gone through replacing anything that was needed and the crack free magnesium case was Chromated.

All suspension was stripped of the original chrome, checked and re-chromed.  Red liked the chrome look rather than the nickel plated common on cars of that era as long as the part was heated after the chroming application took place. All parts which were originally chromed were redone.   All four Koni shock absorbers were completely gone through, dynoed and restored to original by Truechoice including the original winged water decals.

Original LeGrand magnesium wheels were media blasted and crack tested before being refinished. The 13×9 inch front and 13×11 inch rear wheels were then mounted with Hoosier spec formula B tires.

A new wedge Fuel Safe 5 gallon cell (built in 2016) was installed in the original position behind the seat and fuel is delivered through a Bendix electric fuel pump.

The original body was reworked to remove spider cracking in the gelcoat after 50 years of having items stored on it and then straightened out.  Reinforcement was added in certain areas to ensure the body is more solid for getting in and out as well as above the pedal area which was prone to cracking over time.  Red liked to paint the lower section of the body in a darker color as he felt the car looked “a little fat” around the radiator area. Dark royal blue was used for the lower color to contrast the white.  To keep the original LeGrand factory design, a semi-circle was incorporated in the blue on the sides where the number/meatball area is located.  Bright red dual stripes run from the nose to the tail.  The exposed Lotus valve cover is painted the same bright red. A 1/8” matching red pinstripe follows the blue edge and then completes the upper outline of the meatball.  The chassis was repainted the original Dove gray. An original NOS nose badge completes the body.

A new Lexan windshield and side screens were fabricated with chrome Sebring mirrors which are period correct.

The seat is the original fiberglass racing seat with original diamond stitched upholstery which is held in place with two dzus fasteners.  New Sabelt Formula car 6 point harness with an expiration date of 2024 have been installed.

The car was completely rewired with all terminals soldered and heat shrink wrapped for moisture resistance and reliability.

The four original magnesium Airheart brake calipers were rebuilt and new aircraft Paraflex nylon hoses were utilized as original.  These are feed by rebuilt original Airheart master cylinders which are mounted above the re-chromed adjustable pedals.

According to Gerhard Klose who worked for Red LeGrand as a fabricator and partial designer plus he raced a MK6 back in the day, there were very few LeGrand cars which received a chassis stamp or ID plate. Red nor anyone else who worked there never would have thought the cars would be a part of race car history and being restored 50 years later.  Al James provided an original NOS chassis plate and the car is now listed with the LeGrand Registry as a Mk6, car number 101. There are no log books as the car was never completed or raced.

Original new Goodyear Blue Streak tires with the sales tag attached (nice to have but you wouldn’t want to use them). Car also has original period pit wheels with narrow Goodyear racing tires mounted. Front and rear spoilers in primer. Master cylinders as cores and need rebuilt, miscellaneous Hewland parts, original aluminum fuel can and other smalls.