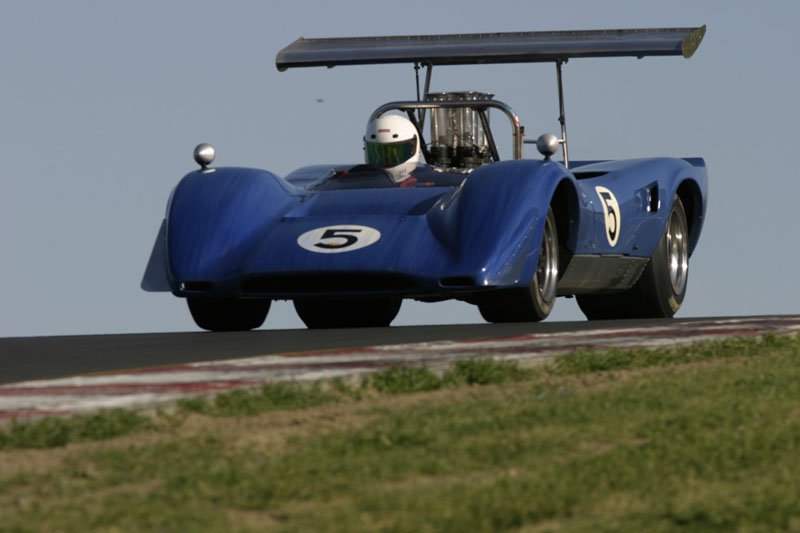 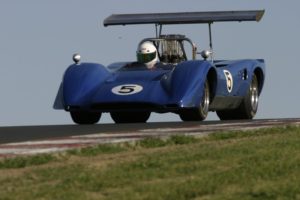 The early period history of this car is reported by Wouter Melissen of the Ultimate Car Page (ultimatecarpage.com) as follows:

The first T163 built, this example was acquired new by Lola’s North American distributor Carl Haas. Liveried in the bright orange Simoniz colours, it was entered in the opening rounds of the 1969 Canadian-American Challenge Cup for Chuck Parsons. Before switching to chassis SL163/16, Parsons placed fifth at Mosport and 3rd at St Jovite. Haas stored this chassis and then sold it to Dick Durant, who also owned 16 at this time. After passing through several hands, it was acquired by a long-time owner in 1985, who has since raced it in historic events.

RacingSportsCars.com confirms Chuck Parson finishing 5th at Mosport and 3rd at Mont-Tremblant (St. Jovite). However it appears they are unsure as to the exact chassis Parson’s was driving for just those two events. At the next race, Watkins Glen on July 13,1969, RacingSportsCars.com reports Parson’s was now driving chassis SL163/16, which he continued to race thereafter. There are no further reports of Parsons racing SL163/15.

In addition to the above, Wouter Melissen also reports the following about chassis number SL163/16:

Chassis: SL163/16
Chassis 16 was the second T163 allocated by Carl Haas to Chuck Parsons for his successful 1969 Can-Am campaign. Finished in bright orange, it was driven to 3rd at Road America and Laguna Seca, which helped Parsons place third in the final standings behind the two McLaren drivers. At the end of the season, it was sold to Dick Durant, who campaigned the T163 under the Racing Associates banner. It was raced well into the 1970s and has since changed hands several times before it was acquired by the current owner in 2002. He also owns a second example wearing this livery with a SL163/15 chassis tag.

It is notable that Melissen reports that “CHASSIS SL163/16” changed hands several times before being acquired by the current owner. However with regard to SL163/15, Melissen reports that the owner of SL163/16 “…owns a second example wearing this livery with a SL163/15 CHASSIS TAG” – as opposed to the actual chassis SL163/15.

The history as presented to us is consistent with the foregoing. For those who are seriously interested in this Lola we can provide you photos of the chassis tag still riveted to the tub so you can judge for yourself.