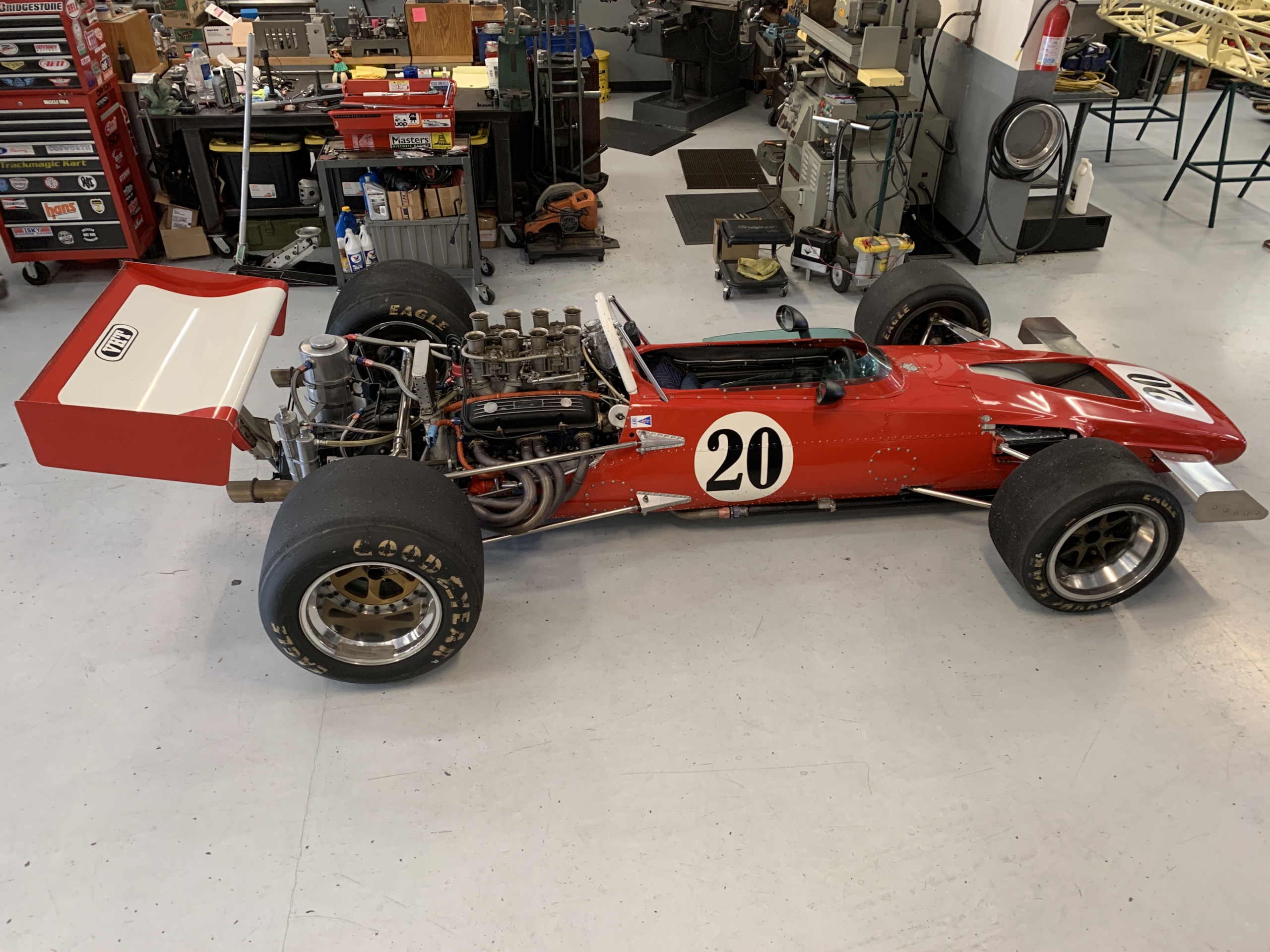 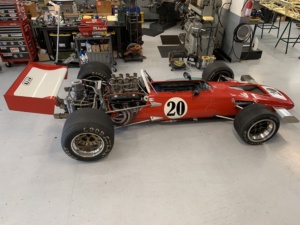 As the 1960’s were drawing to a close, Terry designed a Formula 5000 car. That car would become the very successful Surtees TS5. David Hobbs would race his TS5 to second in the 1969 U.S. Formula A/Formula 5000 championship. These results inspired Terry to create Leda Cars, Ltd. and to design and build his own cars for 1970.

Leda Cars built four LT20s. Number 102 is the second, and the car offered for sale here. We will refer to it here as LT20/102. A unique feature of the LT20 design was the use of identical suspension components for both the front and rear. The first car, Number 101, was built for Malaya Garages and driven by Mac Daghorn. He totaled it during practice for it’s debut, the round 1 race of the 1970 English Guards F5000 Championship, at Oulton Park.

Car number 102 was commissioned by Broadspeed for Chris Craft, and was originally powered by a Ford Boss 302.  It was raced at Castle Comb and qualified 6th.  Craft was unhappy with the handling and felt the car needed further development.  Unfortunately the car was crashed during testing before the next race.  It was repaired but not in time to compete in further races for the 1970 championship.

Cars number 103 and 104 did compete later in 1970 and in the hands of American Formula 3 sensation Roy Pike, driving for Malaya Garages. Pike achieved several podium finishes.  Ultimately these last 2 cars were also written off in 1970. Number 102 is the sole survivor.

In late 1970 LT20/102 was sold to Dan Gurney at All American Racers for Swede Savage. However AAR’s plans changed. On February 26, 1971, AAR sold the Leda to Phil Henny, a Shelby American race team mechanic on the Gurney/Foyt 1967 Le Mans-winning GT40 Ford. You can see a photo of Henny celebrating the victory riding on the Le Mans winning GT40 with Gurney in an excerpt from Henny’s book, Dan Gurney Nostalgie.

The LT20’s  suspension design, using the same arrangements at both ends of the car was problematic. The handling was unpredictable, and would lead to accidents, including those that destroyed the other LT20 chassis. After a crash at Laguna Seca 1971 Henny decided the time was ripe for LT20 rear suspension revision.

Henny traveled to England to meet with Len Terry in person to work out a solution. One of the most successful F5000 cars at that time was the McLaren M10. The decision was made to graft the M10’s rear suspension onto to the Leda, making the engine a stressed member of the chassis.

Henny left Terry’s cottage, driving several hours to see his friend Bruce McLaren. Henny and McLaren discussed the design problems with the LT20, and Henny came away from their visit with a complete M10 rear suspension kit to install on the Leda. It would be coupled with with a Hewland LG 300 gearbox and Chevy engine.

Back in California, and with the help of legendary race car engineer, Carroll Smith, Henny installed the M10 rear assembly onto the Leda. The modification made the engine a stressed member of the chassis, and significantly improved the stiffness of the car. It cured the car’s original handling problems. Henny began referring to the car appropriately as the “Leda-McLaren”

Out of the box Henny was eight seconds per lap quicker than his prior race at Laguna Seca. The handling was now excellent. He and the Leda-McLaren finished third in their successful return to Laguna at the SCCA National F5000 race.

The next chapter of the Henny Leda  took place off the track. The Leda was a great looking, great sounding, very fast race car. Located in Southern California, Henny and the Leda attracted the attention of the movie and entertainment industry. As a result, Henny and the Leda were often asked to do commercials, and photo shoots for advertising. One was a film promoting the new Ontario Motors Speedway. Others were for products, such as Quaker State Motor Oil.

The next segment of Leda LT20/102’s history is reported at  OldRacingCars.com/Leda/LT20 as follows:

“Phil later sold the car to motorcycle racer and journalist Bob Braverman (Northridge, CA), who raced it in SCCA Regionals at Riverside in 1976. Braverman died in 1982 aged just 52, and the Leda disappeared.

Some time before 1990, Peter Boyd of PVB MotorSports (Los Angeles, CA) bought a Leda LT20 from Iverson Movie Ranch where it had been used as a movie prop. In late 1990 or early 1991, he sold it to Chuck Haines. Haines later advertised the car as Leda LT20 102, and sold it to Tom Fredericks who thought it might be useful for rebuilding a McLaren M10B. In the late 1990s, about 1998, Danny Gallant (Oakland, CA) saw the car at Fredericks’ workshop and bought it for his customer Dr Bruce Jacobs. Gallant rebuilt the car but on Jacobs’ first test, it overheated, and on his second test a rose joint broke and Jacobs’ wiped the front left corner off it. Just like old times!

Jacobs lost interest in the car, and in 2004, it was bought by Dean A. Beaupre (Occidental, CA) and restored the car for vintage racing. Raced by Beaupre at HMSA Thunderhill Raceway Park in March 2010, the CSRG Charity Challenge at Infineon Raceway October 2011, and HMSA Laguna Seca in June 2012.”

The current owner has had the car maintained by Cypress Lane Racing at Sonoma Raceway. The car has been run in just a handful of vintage races over the past few years.

Broadspeed Racing – May to June 1970 – returned to Leda after testing crash.

All American Racing – Dan Gurney – bought car after repair in fall of 1970.

Iverson Movie Ranch – Driven by Steve McQueen in a promo film for the new California Speedway. Made a few commercials (Quaker State), and was used as a movie prop.

Tom Fredrickson – Intended to make it a parts car for a Surtees TS-5 project. Date Unknown.

In addition to the above, there is additional obtainable information about the Leda LT20’s and LT20/102 in particular. Len Terry wrote a book in 1971 entitled “Racing Car Design and Development” in which he spends some time talking about the car.

Phil Henny wrote a book called  Just Call Me Carroll about his experiences with Shelby.  In that book he devotes a chapter to the Leda-McLaren. You can also connect with Phil directly at PhilHenny.com. The  MyF5000.com site includes records and photos of Phil Henny’s races. A Google search for “F5000 LEDA” will usually turn up photos taken at vintage races and sometimes old photos. So there are many sources for information about this Leda.

The Leda comes with HMSA and CSRG log books.

The Leda is a highly competitive Class A, pre-1972, Formula 5000 to run with the historic Formula 5000 series in the U.S. It also qualifies for the HSCC Aurora Trophy Series Championship in the U.K., with races at Silverstone, Donington, Oulton Park, and Brands Hatch. The Leda will run in the Class E, pre 1972, Championship.

The Leda also qualifies to run with the F5000 New Zealand Series. There it will be in good company with perennial fast qualifier and overall race winner Michael Collins in his Leda GM1.

So there are many places to race the Leda worldwide, and to contest for championships. At its current price it is also probably the best bang for the buck in Formula 5000 racing no matter which continent you are on.

When the Leda was most recently purchased, the decision was made to leave the car with its period racing patina. However the rest of the car was thoroughly gone through, as described below.

The front suspension on one side was bent so jigs for the upper and lower wishbones were built and new wishbones for both sides were fabricated from 4130 steel.  All Rod ends were replaced. The front uprights were removed, crack tested, and new bearings and seals installed. The steering rack was disassembled crack tested and rebuilt.  All four shock absorbers (Koni adjustable) were rebuilt and tested on a shock dyno. The rear suspension (McLaren M – 10) was removed and crack tested.  New rod ends were installed. The rear uprights were removed and crack tested.  New bearings and new seals installed.  The drive shafts were replaced with new half shafts including U-joints and slip yokes.

The transmission is a Hewland DG – 300 5 speed with locking differential (Hewland “Power Loc” clutch type).  The entire unit was rebuilt in 2014 with new gears, clutch disks, dog rings, bearings, and a new ring and pinion installed. The transmission was checked 2 events ago and new dog rings were installed.  No other issues found. The DG 300 uses DG 300 gears or slightly modified DGB gears.  Parts are available from Hewland or other sources.

A new aluminum radiator and fire system were installed.  The car is wired for radio use but does not include a radio.  The instruments are original including an original Smith’s chronometric tachometer with tell-tale. A MSD revolution limiter is installed.  It has a transponder permanently installed.  New front wings have been installed and the rear wing mount has been reinforced.

The engine is a new build, zero time, Chevrolet with 302 cubic inches (5 liter). It uses a 1971 Chevrolet block that was prepped for racing and fully studded with ARP studs. It is the high alloy block.  The heads are World Products that were prepared by Bob Gromm Racing. Carburetion is 4 48 IDA Webers on a McKay manifold.   The exhaust is new stainless steel by SPD. The original exhaust is included.  The engine was specifically designed for vintage racing with good torque and a presumed 8000 RPM limit.  It was not dynoed since it was built to the same formula as the engine it replaced.  It is “0” time having only been started up and idled. It will require some slow timing before full power is used. It has 4 bolt mains with ARP studs. It has a 4340 forged crankshaft, 4340 forged “H” beam rods with ARPs best  L-19 bolts.  The pistons are new forged high compression with domes.  The compression ratio is approximately 11.5 to 1.  This “formula” was dynoed on the original engine and resulted in about 500 B.H.P with about 320 Ft. Lbs. of torque.  The headers for the car would not fit on the dyno so an older set for a street car were used.  The use of the new SPD race headers will increase power somewhat.  More detailed engine build information is available.

There are spares with car.  These include suspension parts and jigs, spare nose, one spare upright and miscellaneous other parts. There is one set of new wheels (Jongbloed) that need a center spacer installed.