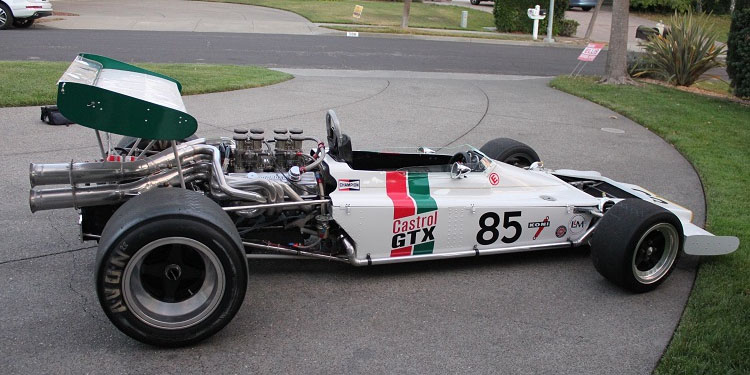 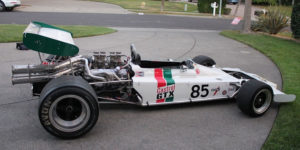 Canadian Racer, and soon to be double Formula Atlantic Champion, Bill Brack traveled to England with his chief mechanic, Doug Crosty, in December 1969 to order a new Lotus 70 Formula 5000 directly from the Lotus works. While there Doug convinced Lotus to provide them with Lotus 70 factory blueprints as they would be critical when racing the car in the U.S. and Canada, far away if spares and repairs were quickly needed. The blueprints come with the car.

Bill took delivery of the car and began racing it in the U.S. and Canada in the spring of 1970. His racing results for 1970 through 1973 are posted below.

Brack next sold the car to Tope Racing Enterprises (Warren Tope) in Troy Michigan for Ed Hinchcliff. OldRacingCars.com reports that Hinchliff entered one race at Watkins Glen, but did not start. Subsequent history is unknown until the car was purchased by Bruce Trenery in the early/mid 1980’s. According to OldRacingCars.com, Trenery was told the car was the ex-Brack car from Canada.

Trenery then sold the car to Dennis Greenwood in the mid 1980’s. Greenwood autocrossed the car until selling it to Californian John McDonald. McDonald also autocrossed the Lotus until his death in 2005. Thereafter the car was purchased by James Faulknor. Restoration was started and the car next appeared at RM auctions, where Bill Brack authenticated the car. Thereafter the car was reported as sold by a Northern California car dealer.

The Lotus has not been raced since the early 2000’s. In the mid-2000’s the car was stripped to the bare tub, polished, new wheel bearings installed, new rod ends installed, and new fuel cells (which now need to be replaced again) installed. The engine was gone through, but there are no receipts to indicate what was done. There are receipts, however, showing the LG 600 Hewland gearbox was gone trough by Taylor Engineering in Texas. So the gearbox should be race ready. The rest of the car was bolted together and runs and drives. The new owner should carefully go through the car to make sure it meets their standard before racing it in anger. However, the car is also priced accordingly.