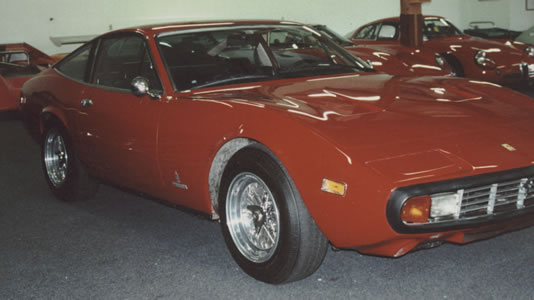 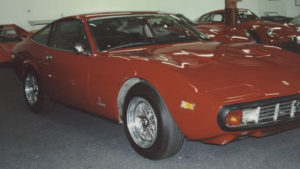 Approximately 500, 365 GTC/4 Ferraris were constructed during the years 1971-72. This Pininfarina design is perhaps the most sleek and elegant of all 2+2 sports car ever produced. The low, aerodynamic hood line was enabled by a redesign of the Daytona’s four cam heads, intake and exhaust manifolds to accept side draught, instead of down draught, Weber carburetors.

The chassis of the GTC/4 is very similar to the Daytona, but a 100 m.m. longer to accommodate the 2+2 seating. This also increased driver headroom. The other chassis difference between the GTC/4 and Daytona was the mating of the gearbox directly to the engine in the GTC/4, instead of at the rear of the car, as was done with the Daytona.

The GTC/4 was immediately well received, and sold in record numbers for Ferrari. Its classic Pininfarina styling, combined with Ferrari’s legendary V-12 engine and fine road holding make this luxury GT one of the best Ferrari values in today’s market.

The Ferrari is in excellent condition