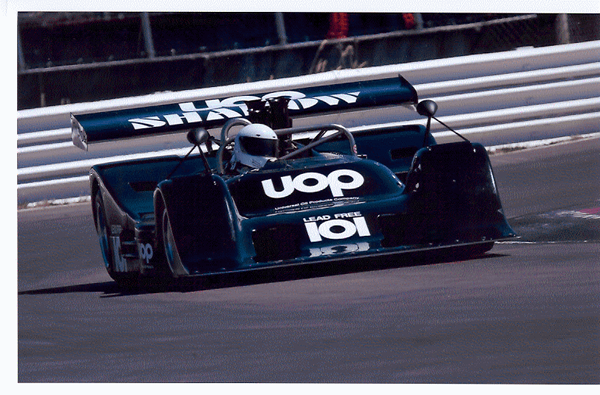 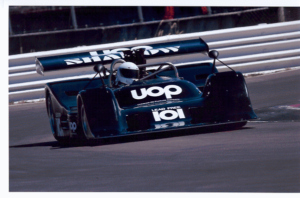 This normally aspirated Shadow DN2 was raced by Jackie Oliver and James Hunt in 1973. It is chassis number 1A, and one of only two DN2’s constructed. The other DN2 was the turbo charged car, which unfortunately suffered setbacks in every event in which it was entered. Shadow was stretching itself thin in 1973, designing and building their new F1 cars as well as constructing their latest Can Am cars to compete against the Porsche 917’s of Mark Donohue, Hurley Haywood, and George Follmer.

Chassis 1A was the more successful of the two 1973 Shadows. It was entered by Don Nichols and Union Oil Products in all 8 of the Can Am races that season. Unfortunately, the car struggled at the start of the season with various teething problems. However as the season neared the end, the car got sorted out and became a front runner.

Jackie Oliver was the primary driver of Chassis 1A in 1973. But in mid-season rising Grand Prix driver, James Hunt, got the nod to drive the car at the Road America Can Am race. Unfortunately another niggling teething problem sidelined the car for Hunt. This time it was a fuel metering gasket failure.

Thereafter, Oliver and chassis 1A began to find their legs. At the next Can Am round, Edmonton, Oliver finished 3rd behind Donohue and Follmer. At the following event, the Monterey Castrol Can Am at Laguna Seca, Oliver drove the Shadow to second behind Donohue, but ahead of Hurley Haywood’s Porsche 917. At the final race of the season, with the Shadow running strong, Oliver had an incident on the third lap, damaging the bodywork such that he could not continue. So just when the mechanical issues were finally sorted out, an on-track incident sidelined the car in its final race of the 1973 season.

All history subsequent to the 1973 season is known documented as well. The log books go back to 1991, when the car was purchased directly from Don Nichols at Shadow.

The engine is by Steve Jennings Racing Engines, done several years ago but has only been run a handful of short test sessions and 6 events. The engine has its original Lucas McKay injection, Vertex magneto, and Weaver dry sump pump.

Since 2009 the Shadow has received the following work:

The Shadow is complete with one set of original wheels, and an additional set of reproduction wheels made by Jongbloed, plus one extra front.