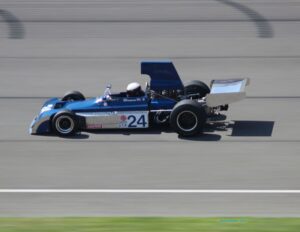 Raced by Peter Gethin in early 1973 befogging coming to the U.S. Raced in U.S. by Bobby Brown. Also raced by Tony Dean.

OldRacingCars.com – Chevron B24 reports the history as follows:

After the crash damage in the late 1970’s the Chevron was re-tubbed in the 1980’s and restored. In 2010 the car received all new front suspension, including a front subframe, Since then the Chevron has continued to be raced in historic events.

The Chevron is currently in the Cinderella’s Rockerfella’s Livery.  This was a nightclub in Leads, England that sponsored the car at one point.

The Chevron has a legal 302 motor with aluminum heads and early McKay injection as run in period.  It even has its original block, which has been completely rebuilt and has only one race on it.

The Chevron comes with two sets of wheels (Chevron 13” fronts, MEL Mag 15” rears) and a set of MEL Mag 13” rears. It also comes with fully bodywork, including three noses (and a nose mold), cockpit surround, engine cover (rare), and two intake scoops (Chevron, and Lola T300 as added in period by Bobby Brown). Included in the sale will be all the drawings and blueprints for the car.

The Chevron can be transported on its race tires or the narrower trailer wheels and tires that will come with it.

Also available, at additional cost, is a complete, in pieces, Morand motor with the slide injection that was run in some of the B24s in period.

More information and photos to come.