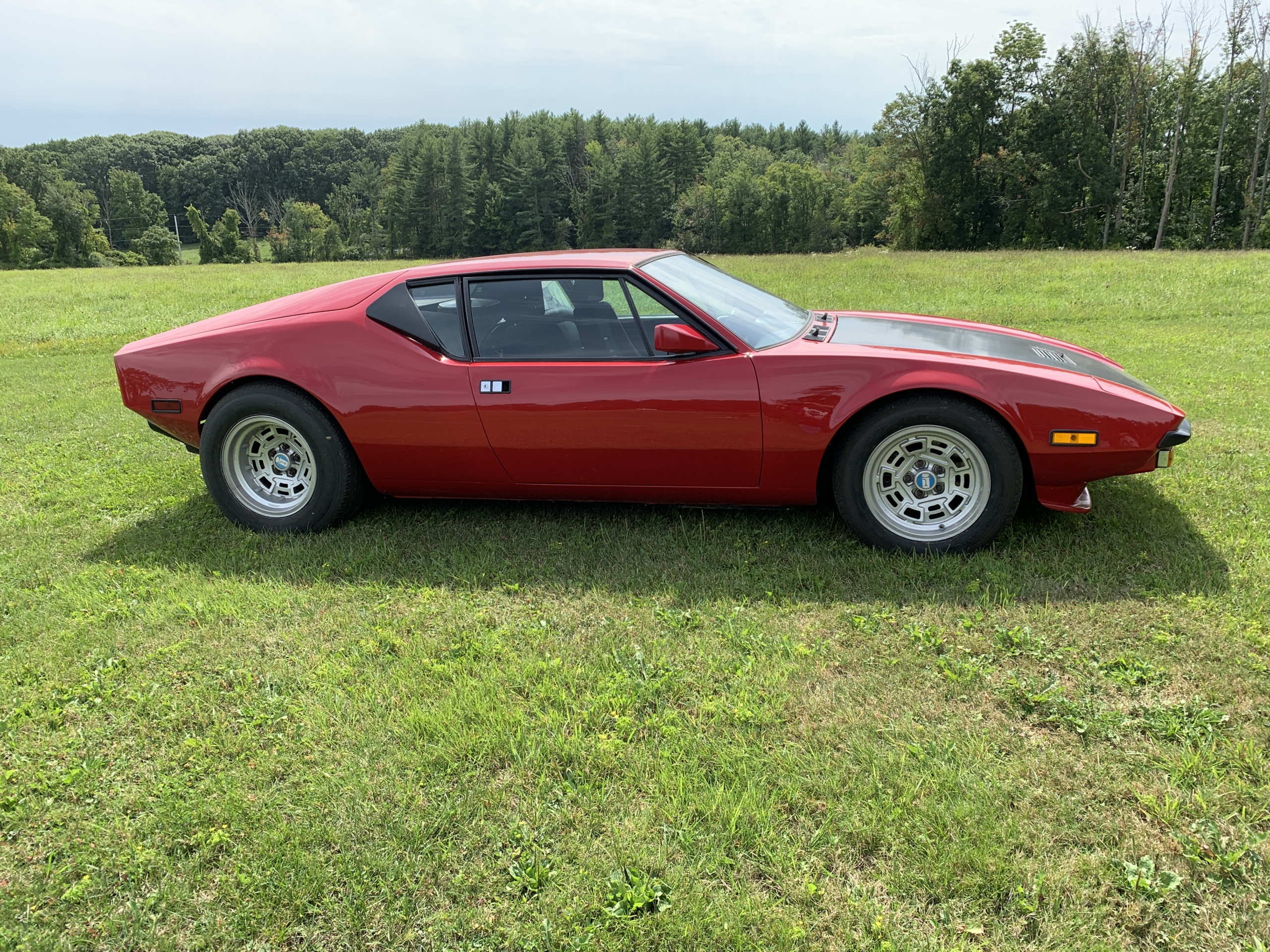 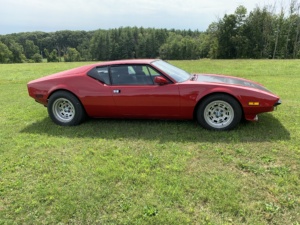 The Pantera was originally purchased from Peterson Lincoln-Mercury of Lynn, Massachusetts by Bardhyl Babo, also of Lynn Massachusetts. The car was white with its standard trim 1973 L bumpers front and rear.

Babo retained the Pantera until November 15, 1976, when he sold it to the second owner, Robert Branagan, also from Massachusetts. The Pantera had 20,234 miles on it when sold.

The Pantera was next sold to its current owner/the estate, also from Massachusetts, in 1986.

This owner, a body shop owner, stripped the Pantera to bare metal and did a color change to red. His plan was to build a GTS clone for himself.  He fitted wider, original style Campagnolo rear wheels, and new Avon tires. The original rear wheels do come with the car.

Other modifications included the installation of an aftermarket air cleaner, side air scoops, vent window mounted rear view mirrors, a kill switch, and 1972-style front bumpers, and a new front air dam. The rear bumper was also removed. A vent in the hood was also added and as well as a vented panel at the back to assist cooling. A Holley carburetor and different intake manifold were also installed.

The changes and modifications done were accomplished over some  20 -30 years or so. During that time the Pantera was driven precious little as it was still a work in progress in the owner’s eyes. So the car spent most of its years stored, either in the owner’s shop, his garage, or the garages of friends and family.

Around 2015, the owner was diagnosed with cancer. He transferred the title into his name and that of his wife, so that if he should not survive, the car would be hers to keep or to sell. Unfortunately, the owner passed away a couple of years ago. She has now decided to let the car go.

We are not Pantera experts, but we did own one for over 30 years, and do have some personal experience with them. Although the photos to not accurately show it, this Pantera has very little rust. What is there appears to be only minor surface rust. The only significant rust we have seen is on the back edge of the trunk lid. The photos show these rust bubbles quite accurately. However, the underside of the car is really good and solid, as would be expected for a documented low mileage car. The rocker panels, lower fender lips, and main chassis structure all present as straight and unmolested. We also found no evidence of any accident damage.

Unfortunately the Pantera does not come with its original air cleaner or original side “gills” that were replaced with the current air scoops. However, the car does have its original fiberglass trunk, which needs new felt, but it will be included.  The Recaro seats are in poor condition, and should be replaced, but they are usable as-is.

As mentioned, the car has been run very little, especially in the past few years while the owner’s health continued to decline. As seen in the video the Pantera does run and drive, but should receive a good going over before taken on any significant road trip. For example, the windows “want to work” but they struggle, and care should be taken to lubricate the mechanisms so as not to damage anything. The car runs well, and came up to temperature (and cooled with its fans) in normal fashion. Amazingly, for the amount of time the car has remained idle, it does not smoke or make any strange noises, such as stuck lifters.  The clutch is a little “grabby” but that is probably a little rust on the flywheel from sitting, and will improve as the car is driven. The clutch does not slip a bit, and appears to have been replaced at some point.

While the car could be returned to its original, matching numbers, configuration without much effort (mostly bolt on items) we think you might want to consider keeping the car as it is. It looks great in its current configuration and color – which is a complete color change with no evidence anywhere that the car was ever other than red. There are a few minor scratches or nicks to the paint, mostly at the rear trunk lid area. There are a couple of minor dings or dents, but they are so minor our camera could not pick them up. The point is the car really looks good, and incredibly straight, especially for its age.

If you have been looking for a really good, documented, low mileage, virtually rust free/accident free, matching numbers, running/driving Pantera, this one is worth considering.

The Pantera is currently located in Massachusetts.