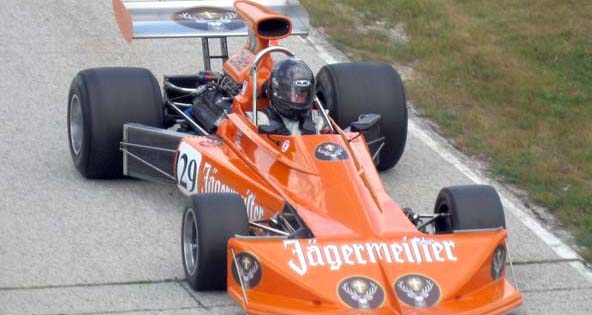 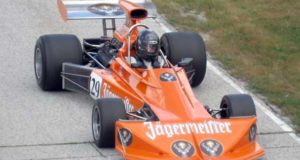 Officially, March raced only two 741 Grand Prix cars in 1974, chassis number 1 and chassis number 2. However, these two chassis suffered multiple shunts during the season at the hands of Hans Stuck, and Vittorio Brambilla. As a result, March constructed several replacement tubs during the season, resulting in as many as five different chassis combinations used throughout the 1974 Grand Prix campaign. This is well documented through March, and subsequent books on March cars, including Allan Henry’s “March: the Grand Prix Cars.” This car is one of the chassis #1 cars, most frequently driven by Hans Stuck, but also raced by Brambilla and Reine Wissell.

At the end of the 1975 season, this 741-1 was purchased from the March factory by a USAC team to convert to race in U.S. Indy Car races. The car raced at the Milwaukee Mile, and several other races. When the car was most recently restored, these special USAC fuel cells were discovered still in the car. The tub was also modified with a cross over pipe to join these USAC cells, which confirms this was the 741-1 chassis sold by March to the USAC team. The car was sold again, to another Indy Car team, who achieved little success with the car.

Thereafter, the car sat for many years before being acquired by Marc Bahner. From Bahner the car went to Dean Tank, who had it restored. Tank ran several races with the car before selling it to the current owner.