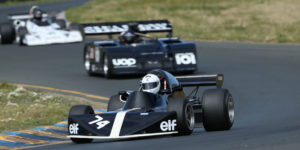 The 1974 March factory chassis records show the Trivellato Racing Team took delivery of six March 742 Formula 2 cars, including this car, chassis 07. Trivellato was also the March works factory agent in Italy. The cars were powered by BMW M12 Neerpasch engines, or M12 Schnitzer engines. Team drivers included Giancarlo Martini, Gbriele Serblin, Cosimo Turizio, Paolo Bozzetto, and Carlos Jarque. At this time we are not certain which drivers campaigned this specific car on behalf of the team. More research is needed.

In the late 1970’s/early 1980’s, Marc Bahner of the U.S. purchased the car in Europe from a privateer F2 driver. The car had been damaged and Bahner bought it to repair the car. Nearly 30 years later, Bahner got around to repairing and restoring the March. He restored it in Formula Atlantic trim to compete in U.S.vintage racing. Shortly after completing the restoration, Bahner sold the car as part of a three car package.

Since restoration, the car has competed in all three Monterey Reunion Formula Atlantic feature races as well as other races. The March has been continually maintained by John Anderson Racing. It last raced in April, 2015, and is ready to go.

The March currently has a Jay Ivey built 1600cc Cosworth BDD engine with only one hour on it. Chassis dyno results show 215 hp at the wheels. The engine is mated to a Hewland FT-200 gearbox. The car comes with Formula Atlantic and Formula 2 bodywork. The car can easily be converted back to F2 spec.