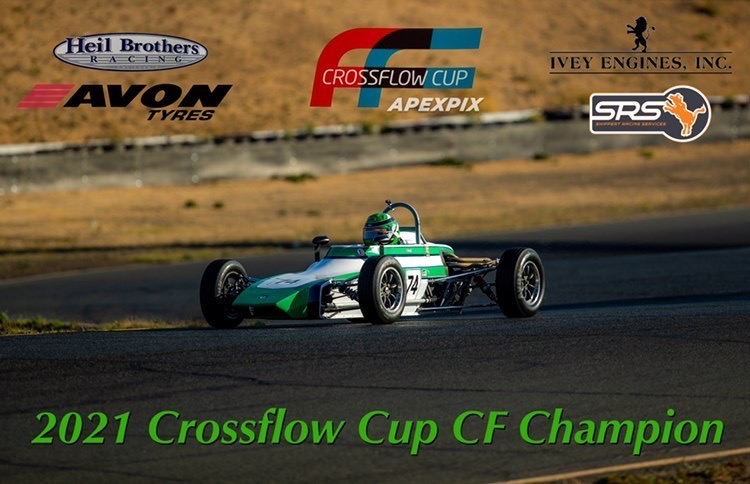 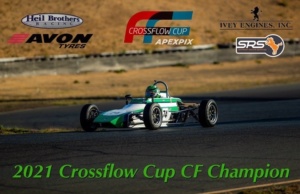 Chassis number 75-30F-02. Only three owners from new, which is very rare for a Formula Ford.

Purchased new in 1975 as a 1600 c.c. Formula Ford by Richard Sloane. Raced by Sloane in SCCA Nationals in the mid and late 1970’s. Sloane sold the car for a brief period, but then bought the car back and converted to FC specs with a 2 liter Pinto engine, Crossle 55F nose, side radiators and front and rear wings. See photos in its red livery below. Always highly maintained.

The description of the Crossle’s build is described by Kris Heil below.

Before the 2021 season a new ARE aluminum oil pan was installed. The oil pump was replaced with a new Titan 4 port pump. A remote filter is used on an ARE filter head with an ARE breather tank. The oil tank is custom. A new Earl’s oil cooler was installed in 2020. All plumbing is new Aeroquip style.

The valve cover is a cast aftermarket Ford piece.

The distributor is a legal Lucas electronic trigger system with conventional epoxy filled coil. A new trigger and coil were installed 6-21

The Tilton starter was installed new at the beginning on the 2020 season.

The exhaust system is 4 into one, stainless steel by Hytech with a titanium colored coating. There is a provision to run a Lambda sensor in the secondary pipe

The carburetor is Ivey tuned and provided with an inlet venturi and the jetting we developed to match the air scoop/filter combination. The throttle linkage is a custom fabrication.

The fuel pump is electric.

The engine currently has 13.75 hours on it since the rebuild.

TRANSAXLE: The transaxle (TGD 2026) was built by Scott Church at The Gear Daddies on 12-1-20 for the 2021 season. A new Rhino case was used and all internals were inspected and replaced as necessary. New dog rings were installed and one new gear. An aluminum differential carried was installed. The diff carrier was provided by and set up by Doug Learned at Fast Forward using new shafts and new spider gears.  An annular slave cylinder was provided. I performed custom modifications to the shift detents for ease of shifting. A new Gear Daddies transaxle adapter was installed. I inspected the gear train in 9-21, and the dog rings and gears were in excellent condition. The gearbox is supplied with the gears we run at Laguna Seca, Sonoma Raceway, and Thunder Hill. The shift linkage was refurbished 3-20 with new Apex universal joints.  The shift lever and receiver were replaced with new parts from Crossle for the 2021 season.

COOLING SYSTEM:  The cooling system uses a custom thermostat outlet and swirl pot. New side pipes were made for the 2020 season and one has subsequently been replaced due to a shunt. The side pipes have built in drains. Where possible, all formed hoses have been replaced with aluminum mandrel bends. Connecting hoses are Gates Green Stripe. The radiator is a custom aluminum C&R Powersports, new 4-21. A spare aluminum radiator provided by Crossle Cars, new 3-20, is included. Most, but not all of the cooling system aluminum parts have been hard anodized for corrosion resistance. A custom coolant recovery tank is at the rear.

BRAKES: The braking system uses Girling 14LF and Girling 12 SP calipers. The calipers were rebuilt 3-20. A titanium heat shield shim backs up the front pads. New,custom floating brake rotors and hard anodized hats were installed 10-20. Brake master cylinders are Wilwood and were installed new on 6-21. All brake lines are -3 Aeroquip. The car is set up with a custom left foot braking pedal, and a custom clutch pedal. All clutch plumbing is -4 Aeroquip.

STEERING: The steering rack is the stock unit that has been modified for adjustable preload. Considerable effort has been expended to optimize the steering geometry. The steering arms and inner ball joints are custom. Spare steering arms are provided. The MOMO steering wheel has Strange Engineering removable hub and the Crossle emblem.

Front: 3-20 the uprights were magnafluxed, the stub axles were replaced with new chrome-moly pieces and billet hubs were installed with new bearings and seals. Bearing spacers were machined to control preload. Steering has been optimized as described above. The upper A arms have been replaced with 32 F A arms for easier camber adjustment. The bearings were inspected and re-packed. New rod ends were installed as necessary.  After a shunt 6-21 , the right front suspension was replaced, including the upright, stub axle, a arms, all rod ends and bearings, steering arms. The steering links were magnafluxed and checked for trueness. The upper ball joints have been tuned for minimum friction.

Sway Bars: The car is supplied with stock front and rear bars. An alternate front bar is included. The sway bar links have been replaced with right/left tubular links.

General: The car will be sold with the set-up that was on the car when it won the last race and the 2022 championship unless the buyer requests something different. A spec sheet for the set-up will be provided.

CHASSIS: The chassis was inspected and run during the 2020 season. Prior to the 2021 season it was stripped for a complete rebuild. All hardware was replaced with AN hardware. The main roll hoop, rear stays, and shoulder belt mounts were replaced by Adam Weidauer Fabrication, Sonoma Raceway The new hoop is 3 inches higher than stock and provides more driver protection. All new bars terminate in doubler pads on the chassis. Adam also welded up some unused holes and straightened the bottom tubes in the rear engine bay. The chassis was then powder coated. A new floor pan (6061 T6) was bonded and flush riveted in place. New side panels were powder coated and installed with countersunk machine screws. After the shunt 06 6-21 there was a small crack in a pick-up point, right front. I repaired it with silicon bronze and it has caused no further issues.

Wiring: The wiring is of a high standard with individual grounds and terminal block distribution. Separate jumper battery and charging ports are provided on the left side. A new Odyssey battery was installed for 2021. A mount for the transponder is on the left side.

Seat: The seat is the original fiberglass with black quilted cover.

Ballast: some ballast plates are provided. There is currently 22 pounds of ballast in the car

BODY: The body is genuine Crossle, new from Porter Racing 3-20. Graphics are vinyl. The air scoop is a custom aluminum fabrication with a K&N filter.  The exhaust side of the tail has a custom hard anodized fairing. A new spare nose is provided. Both noses have custom stainless debris screens. The bodywork is in excellent condition. The rear view mirrors are original Crossle items and worth their weight in gold. Neil Porter said they are no longer produced and fewer than 3 sets remain.

We have been following this car around at Formula Ford races the past three seasons. We can attest to its level of preparation and speed. It won the Club Ford Crossflow Cup Championship in 2021 despite skipping the Portland round. It won the Championship again in 2022. The Crossle also proved it can beat both the best Historic and Club Formula Fords on the West Coast.

The Crossle was initially offered at $47,000. Records and receipts can be provided showing over $40,000 invested in the car not including the original purchase of the car and the labor to bring it to its current state of preparation. Even at $47,000 the Crossle represents a realistic value as most of the cars that run at the front of the Crossflow Cup Series have considerably more than that invested in them.

This Crossle, while seemingly not “cheap” up front may well be the best value in SCCA Club Ford, or vintage Formula Ford racing in the U.S. and U.K.  It is a highly developed ready to go car. It has the right bits. It is a  proven consistent front runner. It is also a double championship winner in a huge, highly competitive, series.

So instead of “saving money” up front by buying a less expensive Formula Ford, experience has taught us to buy the best car you can for a realistic price and do your best racing right now. For example, if you buy a $25,000 Formula Ford now, it is highly likely that you will have more than the cost of the proven Crossle in it by the time you might begin to approach the success of the Crossle, and you will probably have spent years trying to get to that level. Your car will also not have the double championship winning history of the Crossle either.

The Crossle is a turn-key solution to racing at the top of the highly competitive vintage Formula Ford scene worldwide, and actually a very good value at this price point.