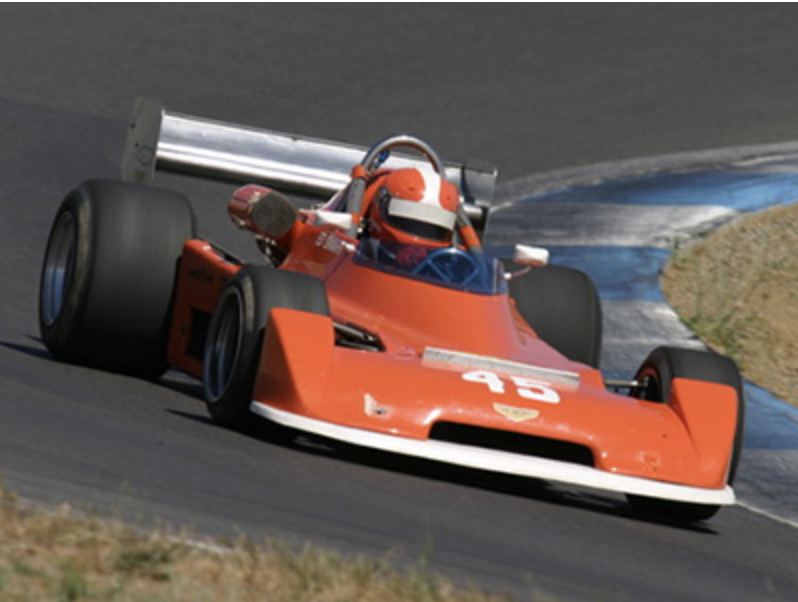 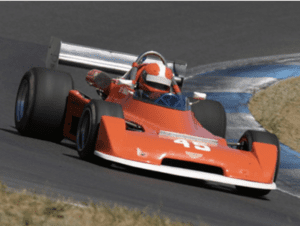 This is one of only five B45 cars constructed by Chevron. These are the last of the Derek Bennett designed Chevrons as Bennett was tragically killed later in 1978 in a freak hang gliding accident.

According to OldRacingCars.com, this B45 was sponsored by the progressive rock band, Jethro Tull in for 1978. The band sponsored the Chevron to promote their new 1978 album, “Heavy Horses  in the Labatts Pro Formula Atlantic Series.

After the Chevron’s pro series campaign, the car ended up in a Canadian car museum. It was discovered there by Peter Hemmings, and sold to Ed Swart in 1989. It turns out that this B45 ex-Pro Formula Atlantic car had been originally equipped with Chevron B42 Formula 2 uprights and suspension. At the time the car was acquired it had an incorrect display car rear wing on it. A correct Chevron F2 wing was acquired and installed as part of a complete refurbishment of the car.

The Chevron returned to competition in July, 1993, still with its 1600 c.c. Cosworth BDA Formula Atlantic engine. The car was raced for a few years with the BDA until the owner opted to upgrade the already F2 spec car with a 2 liter Cosworth BDG. At that time a second fuel cell was installed on the left side of the chassis to avoid running low on fuel.

In 2000 the Hewland FT200 gearbox was rebuilt and received a new ring & pinion. In 2017 the gearbox was again gone into and new limited slip cam & pawl parts were installed.

The Chevron’s ownership trail is short and known from new. It is a three time winner of the U.S. West Coast F/A Points Championship. It has achieved 17 overall wins and 48 class victories in its vintage racing career. The Chevron was last raced in 2022.

This car can win in Masters Formula Atlantic Plus. It can race at the front with SVRA, VARA, and CSRG. It can also compete at the front overseas in the HSCC International Formula 2 Championship for cars up through 1978. It can also race with other historic groups across the U.S. as well as other countries.

Please contact us and we can get you a quote to ship the car to you, either domestically or internationally.

More photos will be added soon.