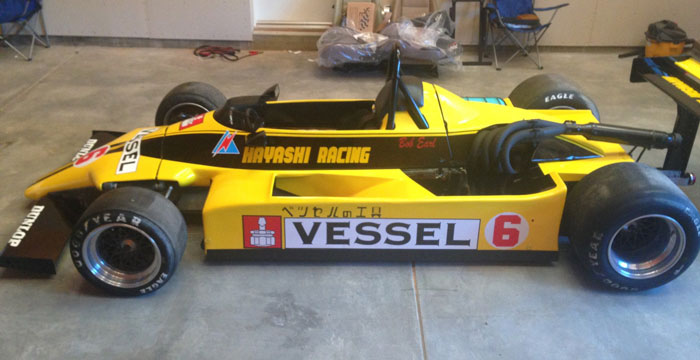 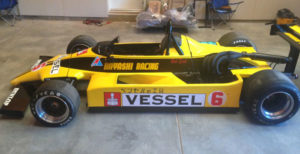 This rare, Japanese-built, Hayashi won the 1981 Macau Grand Prix at the hands of American Bob Earl. Hayashi was a high performance wheel manufacturer that began building racing cars in 1970’s to promote their products.

By 1980, Hayashi was building Formula 3 cars at their factory near the Suzuka racing circuit. Their first effort brought them to third in the Japanese Championship with Osamu Nakako behind the wheel.

For 1981, Masakazu Hayashi, his cousin Minoru (founder of the Dome racing car company), and Masao Ono, designer of the Kojoima Formula 1 racing car, joined together to build the Hayashi 320 Formula 3 car. This time Nakako drove the 320 all the way to capture the Japanese Formula 3 Championship. To see a video of Nakako on his way to the F3 Championship, please see the YouTube video at: https://www.youtube.com/watch?v=ynhTmaxE1gE

The car offered here is the 220P, the upgraded Hayashi 320 in Formula Pacific/Atlantic trim, which included the more powerful 1600cc Toyota engine. After being prepared to Formula Pacific/Atlantic specs, the car was sent to California for Pro Formula Super Vee driver/engineer Bob Earl to test and set up. Earl made a number of suggestions for modifications to improve the car, and it was sent back to Japan to be made ready for the Macau Grand Prix. Earl would be its driver. The Hayashi would also have sponsorship from Vessel Tools.

As a warm up to the Macau Grand Prix, Earl raced the Hayashi at the Suzuka Formula Pacific race. He finished fourth. There was still work to be done to get the car competitive.

At Macau, Earl put the car on the front row, besting the Team Theodore Ralt RT-4’s of future F1 pilots Jean Pierre Jarrier and Roberto Moreno. He also out qualified a slew of March 81’s and Ralt RT-4’s. Earl grabbed the lead at the start and held it to the end to win the famous race. Hayashi had now won a Formula 3 Championship, and the Macau Grand Prix, in a single season.

For 1982, Hayashi went on to win its second Japanese Formula Three Championship with their 321 model, an evolution of the 320. In 1984 Shuji Hyoudo won yet another Japanese Formula 3 Championship for Hayashi. Thereafter Hayashi’s wheel business fortunes began to fade, and by 1986 they were no longer in the racing business. For more information on the 320 and the 220P Hayashi cars please check out: http://www.motorsportmagazine.com/archive/article/may-2003/64/fifteen-minutes-fame-latent-orient

In 1985, this Hayashi 220P was sold to an American wheel manufacturing company and shipped to the USA. The Toyota motor was replaced with a Hasselgren-built Cosworth BDD. The car was then raced in SCCA Formula Atlantic races with three owners from 1985 until 1999. The 220P has not competed since 1999. The engine has 20 hours on it and is currently in running condition. The car comes with a log gook from this period.

The Hayashi remains in very good original condition, with relatively little use since new. The roll bar has been changed, however, likely to meet later SCCA roll bar requirements. The original roll hoop was aluminum, as seen in the period photos. The engine can also be changed back to the original Toyota type 4AGE if desired.

All prior owners are known, and were contacted to confirm the car is, indeed, the Macau GP race winner. Some small spare parts are included with the car.

This Hayashi is an important example of successful Japanese race car engineering, and a rare piece that is destined to be welcomed at historic racing venues world wide.