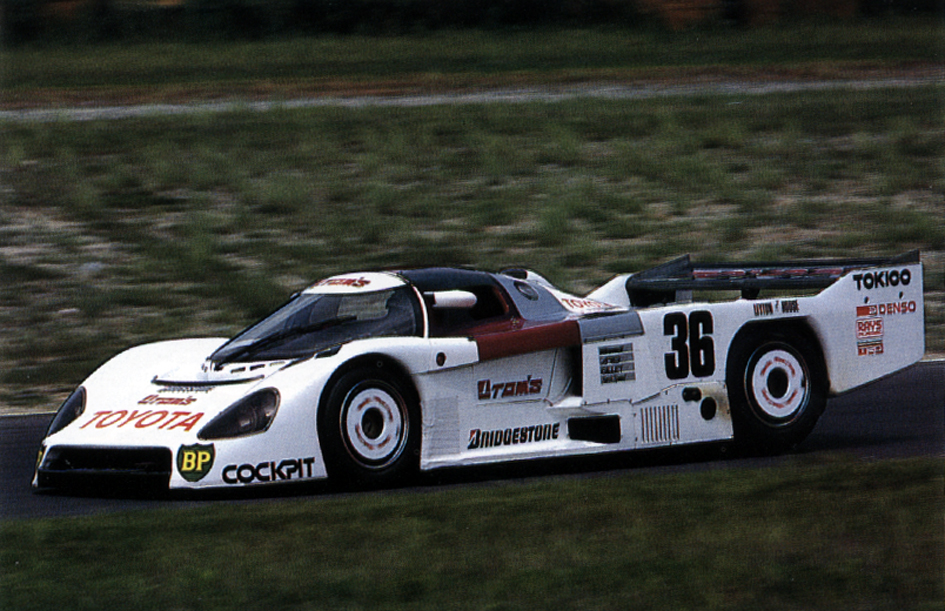 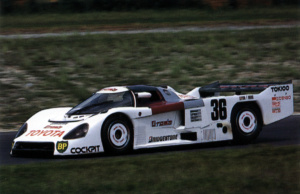 In the early 1980s, Toyota began contemplating racing in the FIA Group C category of the World Endurance Championship (“WEC”), which included the 24 Hours of Le Mans. By the end of the decade, this series would grow to rival the popularity of Formula One. The cars for Group C would also qualify to run in the Japan Sports Prototype Championship (“JSPC”), thereby giving Toyota a local testing and proving ground for their cars. The Group C specification would also permit these cars to race in the United States under the IMSA rules for Grand Touring Prototypes (“GTP”). So there were a lot of sound engineering and marketing reasons to get involved with world sports car racing at the highest levels.

Toyota launched their effort in the early 1980’s by retaining  two racing design and engineering teams, Dome and TOM’S (“Tachi Oiwa Motor Sport”) to develop Group C cars for Toyota. These cars would be powered by Toyota’s 2 liter racing engines.

By 1983, the teams had developed the Dome RC83 and the TOM’S 83C. These cars competed locally in the JSPC, but always with an eye toward reaching Le Mans on the world stage with the WEC. Early results showed the cars were underpowered. The engines were changed from the conventional 2T-G turbo to the factory provided and tuned 4T-G with a twin inlet turbo. In this configuration the cars managed to achieve a second place in a JSPC race, but they still needed further development.

In 1984 and 1985, the 84C and 85C were built as the next evolutions. The engines remained  4T-G modified turbos  but now the main focus was to improve the downforce. This was achieved by changing to a front radiator, changing the weight distribution, and redesigning the body and rear diffuser. Two Toyota 85Cs were entered for the 1985 edition of the 24 Hours of Le Mans. The Dome car dropped out after 141 laps with clutch problems. However, the TOM’S 85C soldiered on to a 12th place finish. Progress was being made.

For 1986, the TOM’S 86C received a major redesign, including the use of carbon fiber and Kevlar to reduce weight. More downforce was achieved in the redesign as well. The engine was changed from the conventional 4T-G modified turbo to the 3S-G modified turbo. Although it was only 2 liters, the 3S-G  was now producing near 900 hp. The transmission was changed from the previous Hewland DGZ to the March GTP gearbox. The suspension geometry was also modified.

The changes worked. F1 driver Satoru Nakajima captured pole position at the WEC World Championship at Fuji in October, 1986 against the best Group C cars in the world. These included the Joest Racing and Brun Motorsport Porsche 956’s. They also out-qualified the  Porsche Kremer Racing, the Bell/Stuck and Holbert/Pescarolo Rothmans Porsche 962’s. Both Silk Cut Jaguar XJR-6 cars were additionally out-qualified, including the one piloted by F1 drivers Eddie Cheever and Derek Warwick. This is the world-class speed Toyota had been striving for since the beginning of their Group C racing program.

Unfortunately, Nakajima was not allowed to start on the pole because the qualifying time had been obtained with the backup 86T car, which had not officially been entered when the qualifying time was set. Nonetheless, coming from the back he still finished in the top ten amongst the fastest Group C cars in the world.

For 1987, the TOM’S team became the official manufacturer team for Toyota, and was renamed Toyota Team TOM’S. Development from the 86C continued to the 87C, which would also race at Le Mans. Toyota would continue to pursue overall victory at Le Mans over the next 30 years before capturing the prize in 2018.

So, what happened to the TOM’S 86C offered here after its 1986 racing season? It is difficult to know precisely which 86C did which races as TOM’S and Dome did not generate chassis numbers, or tags, for their cars from 1983 through 1986. Chassis numbering only began in 1987 when the team became Toyota Team TOM’S. This can be seen in the RacingSportsCars.com listings for the 1986 TOM’S 86C, and the 1986 Dome 86C, where no chassis numbers are listed. However, starting in 1987, at least some of the 87C cars began to appear with chassis numbers.

What we do know is that this particular 86C went on to become the Toyota Team TOM’S show car for 1987. The car was re-liveried in 1987 to reflect the Toyota team’s new sponsor, Minolta. It was exhibited at various Minolta facilities in 1987. The 86C was thereafter purchased directly from Toyota Team TOM’S  by its current owner in 1990. It then remained on display through 2017, still in its 1987 Minolta livery.

In 2017 a full restoration of the 86C was commenced. The question then became which 86C was this car? That was important to determine so that the car could be restored to its proper 1986 configuration and period livery. TOM’S confirmed that the car was one of the team cars raced in 1986, but because they did not keep specific chassis records, they could not identify in which specific races the car competed. They did confirm it was their 86C that was re-liveried to be the 1987 Minolta show car, and that TOM’S had retained the car since it was built and raced in 1986.

The decision to restore the car to its current livery then became based on the fact the car still retained it’s Toyota factory 3S-G race engine. This was the special engine provided to TOM’s for its 86C team car. So it was a natural choice to restore the car to the team’s original 1986, #36, 86C configuration. That is the car that raced for TOM’S in 1986 with the 3S-G engine. No other 86C exists in that configuration. So it made sense the 86C under restoration would be the #36 car.

During the restoration each part was checked, missing parts were indexed, and all parts stripped. The Toyota 3S-G engine was fully rebuilt, and bench tested. A new fuel cell was manufactured by ATL. The  filler neck, collector, and fuel pumps arealso  all new.

Everything inside the gearbox was ordered from Hewland Classic in the U.K. The clutch is a Tilton triple plate. Since the original front window had a crack, a new acrylic windscreen was installed. Some suspension arms were remade, polished and painted. The Koni shocks were overhauled both front and rear.

All the master cylinders were replaced with new, and the radiator was newly made.  All the original gauges were retained except those that were not properly functioning. Those were replaced with new. The ECU is equipped with logger adapted LINK G4. The exhaust manifolds are all new. The tires are new Avon slicks.

After nearly  three years in restoration, in January, 2020, the TOM’S 86C rolled onto the Fuji Speedway, Toyota’s home circuit, for its first run in almost 35 years. To the great joy of everyone in attendance, the 86C fired up and took to the track. The test was a wonderful success. Please see the photos and videos posted here.

The TOM’S 86C is currently in excellent condition, and ready for inspection by any interested parties. Video tours of the car can also be provided for serious buyers.

The 86C  is a piece of Toyota racing history at its highest level, and the beginning of Toyota’s successful quest to win Le Mans.