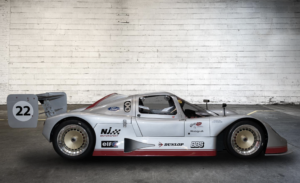 This is the Ex-Peter Hardman Prosport 3000. Hardman won the British Prosport 3000 Championship in 1992 with 6 victories. He won again in 1993, this time with 8 wins. In 1993, he completed the hat trick, winning the Championship with 7 victories over 18 other competitors. Hardman also went on to race a Prosport 3000 Spyder at the 24 Hours of Daytona in 1997.

These cars were built from 1992 through 1997, with approximately 20 examples built. They were designed by ex-March engineer, Arthur Griffin. The goal was a relatively low cost sports car series for the 1990’s for both semi-pro teams as well as amateur drivers coming up through the ranks. The engine was selected for both power and durability, with the goal of an entire season of racing to be done without touching the engine.

This car, chassis #6, is powered by it proper 3 liter, 24 valve, DOHC, V6 Cosworth Ford. The engine produces 300 with a redline of only 7100 rpm. Some Prosport 3000’s including Martin Harrison’s 1997, car were later fitted with V8 power plants for racing in the Castle Comb GT Series. Chassis #6 still retains its original Hewland FT200 gearbox.

The chassis is aluminum-paneled space frame for rigidity and inexpensive maintenance and repairs. The car has conventional double wishbone suspension with coil-over dampers and 4 pot disc brakes.

The Prosport 3000 cars also raced in the U.K. Interserie races in Division 2, and the British GT Series against competitors such as Lola, March, Spice, Tiga, Argo, and others.

The Prosport 3000 has undergone a comprehensive rebuild during the past three years, including complete engine, suspension, and gearbox overhaul, and is ready to go.

More information will be added shortly.