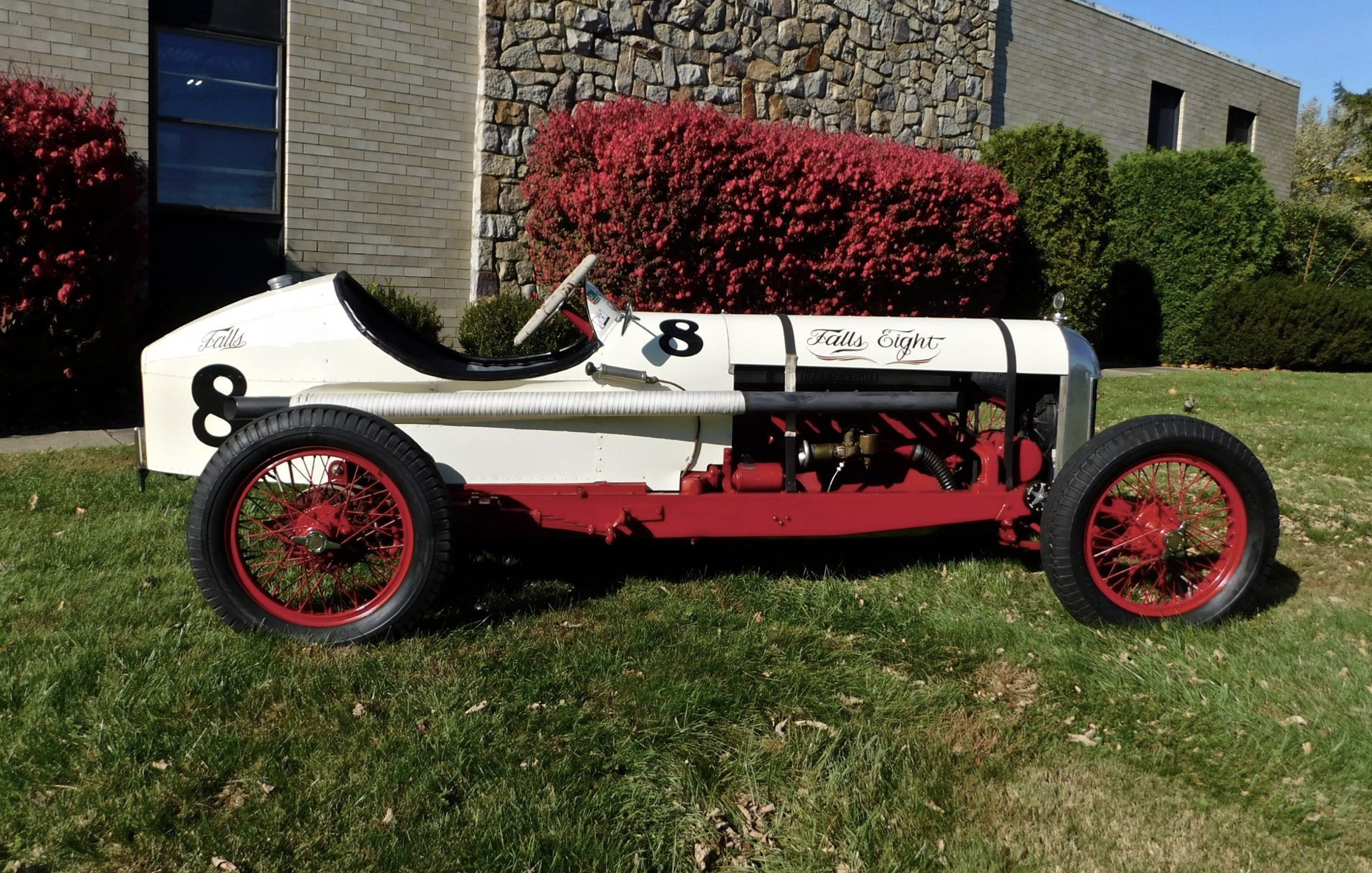 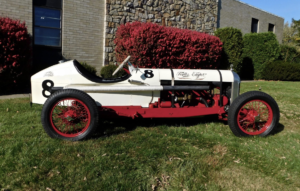 The Falls Eight was built in 1920. It’s name, “Falls Eight” is derived from name of the engine builder, the “Falls” Motor Corporation of Sheboygan Falls, Wisconsin, and the engine’s design, a 5.0 liter straight “Eight” cylinder engine. The Duesenberg Brothers were also working on their own straight eight racing engine at the time, an engine that would power them to the 1921 French Grand Prix victory at Le Mans, and also the Indianapolis 500.

The Falls Eight five liter straight eight engine was designed by Louis Knocke. Both block and head were made of cast iron. It featured a high pressure internal oiling system with both manual, and engine-operated, oil pumps. The Falls Motor corp was one of the first to incorporate the use of hollow crankshafts and pushrods through which oil would flow at high pressure, up to 80 psi to the rocker arms.

The engine is fueled by its solid brass Zenith Duplex carburetor, and is mated to an Elgin three speed manual transmission. The straight eight generates approximately 100 h.p. at 2500 rpm.

The bodywork is aluminum, and mounted to deep channel frame rails, typical of the time period. A Fuel cell has since been installed.

Like the Duesenbergs, The Falls Eight also had its turn at Indy in 1923. Although fast in qualifying, the Falls Eight crashed and was unable to start the race. Additional race history is currently being researched.

The Falls Eight next appeared in 1944, when in unrestored condition, it was given to a young Bruce Mohs as a present for his 12th birthday. The car remained with Mohs for several decades.

The Falls Eight next appeared at auction during the 1990’s. It was sold onto the next owner, who had it restored.

The sparkling car was then shown at the Pebble Beach Concours d’Elegance.

In 2017 the Falls Eight was purchased by its current owner, and moved to the U.S.east coast. There the car has continued to compete in vintage events, including most recently at Lime Rock Park in the fall of 2020.

This is the only Falls Eight powered race car ever constructed. It was built at time when engineering and design were making bold moves forward, leapfrogging technology at speeds rivaled only by the cars that embodied them. This was a straight eight power American car built at a time when a car such as this could race at Indy, or win a Grand Prix overseas.

Those days are now long gone. But the Falls Eight is still here. It remind us of those glory days. As such it is accepted at vintage racing venues virtually everywhere, and would be an excellent candidate to represent U.S. at Goodwood.