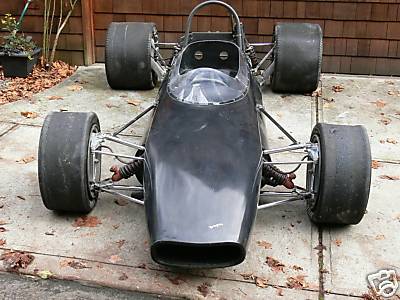 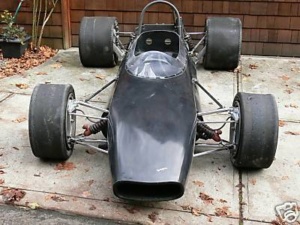 This car is a 1968 Forsgrini (Lyle’s play on words like Ferrari, Lamborghini etc.).
This is a MK 10D and is chassis number 2 as confirmed by Lyle Forsgren. It was originally sold by Lyle as a roller (no engine or transmission) to an airline pilot named Morgeli from Enumclaw,
Washington and sat in his shop rafters for decades.

Morgeli passed away and the car was sold to Mike Flinn, of Portland, Oregon in 2008. The current owner purchased the car, still in its original roller condition, from Mike Flinn, and began collecting the bits to complete the car.

More information about Lyle Forsgrin, and the Forsgrini cars he manufactured, can be found at:

https://www.myf5000.com/drivers_lyle_forsgren.html This site covers the MK 10D with Lyle driving it in the U.S. The car is listed as having a Ford engine so it may be the same car that Mike Campbell campaigned (see below).
https://www.oldracingcars.com/f5000/forsgrini/

The front uprights and steering rack are
particularly interesting since they were machined out of billet aluminum – a common aircraft practice at the time and possibly done in the Boeing machine shops when no one was looking.

Lyle used a ZF transmission in his car but the current owner has acquired a Hewland DG 300, which he feels is a far better choice. It is described further below.

When the current owner purchased the car Forsgrini, he already owned and raced a Leda F5000 which was maintained by
Gallant Racing of Oakland Ca. When they were not doing something to the Leda they went through the Forsgrini.

There are a host of other parts that come with the car, including a line bored and honed block,  a weaver dry sump pump, set of forged pistons for 12 – 13 to 1 compression (.030 over), some new bearing sets, roller rockers, roller followers, water pump with front cover and dry sump drive pulley.

In addition there are a pair of original Z28 302 heads. These are the “double camel hump” heads with the biggest valve chevy could put in ( 2.02” intake and 1.60” exhaust). These are stock and will need to be race prepped. There are a pair of high clearance rocker covers. There is also a used large dry sump tank.

The Hewland DG300 is a zero time John Anderson rebuild with new bearings, seals, and other new parts.  The DG 300 comes with an adapter to a small block chevy.

This is a rare piece of American racing ingenuity from the 1960’s formula car period. It showcases the early formative days of Formula 5000, and will be a welcome addition to any Historic F5000 event.