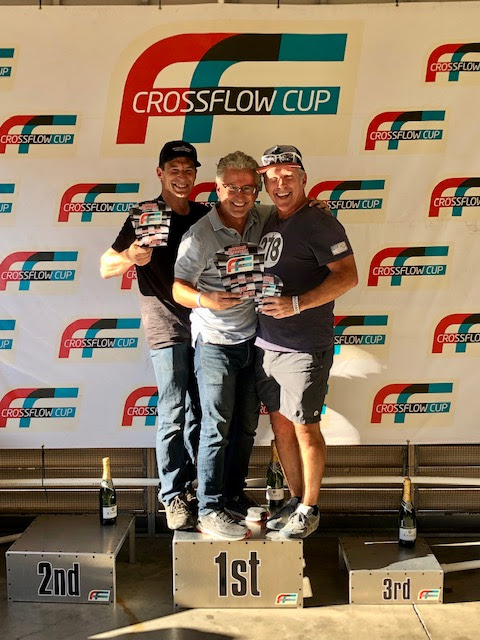 Saturday’s Crossflow Cup Formula Ford race saw future champion, Martin Lauber, drive around the OUTSIDE of me in turn 2 headed for the front. Steve Romak was so far ahead in first place that I never saw him after a few laps. After a fun battle with Danny Baker, I managed fourth place, nearly side-by-side with Andrew Wait at the finish, with Kelly, “jelly man“, Heil, right on top of me in 5th, and first of the Club Fords.

The Lola ran wonderfully in the Formula Junior race, capturing 1st in Formula Junior and 4th overall in the combined Formula B and Formula Junior race. We struggled with the Porsche, however, with a terrible lack of grip on old tires. We could only manage 10th out of about 40 cars. Hopes were better for Sunday when we planned to run new tires.
Sunday was the big showdown in the Crossflow Cup race. This one would decide the champions. Starting 5th again, I did not want to wreck the race for any of the championship contenders, but I also wanted to go to the front.

Poor Steve Romak was out of it before the start with a faulty power switch. After the entire grid passed him stalled on the out lap, they got the switch fixed, and Steve was about to go on a tear from the back of the grid through much of the field.

It was the usual riotous Crossflow Cup start with scant inches between us and brilliant driving all around me. Andrew Wait and Danny Baker got into a serious battle at the exit of the carousel and I saw my chance. I tried to get them both at turn seven but Andrew beat me to it. Danny and I went side-by-side and I managed to eek out second place. From then on I chased Andrew, gaining and losing every lap, until the checkered flag came out. It was a 1-2 for the guys from Motorsports Market with Andrew taking the win, fastest lap, and finishing 2nd overall in the championship to Martin Lauber with Danny Baker 3rd. Kelly Heil went on to win the Club Ford Championship. We did not contest all the Crossflow Cup rounds so did not figure in the final points championship.

The Lola had another great run, winning in Formula Junior and this time finishing 3rd overall within the Formula B group.

We drove the Porsche for the Charity rides at lunchtime, but decided to forgo the final race of the day. The Porsche race was the last race of the day. With three cars and related gear to pack up, tow home, and unload, we decided we would wait another day to sort out the handling on the Porsche.

The Shippert’s Crossflow Cup awards party at the end of the day was like a family reunion attended by friends and families from toddlers to grandparents. We all cheered our new champions and race winners as well as ourselves for an outstanding season of racing and camaraderie. It was awesome! Thank you Ethan and Rebecca!  ” – Art